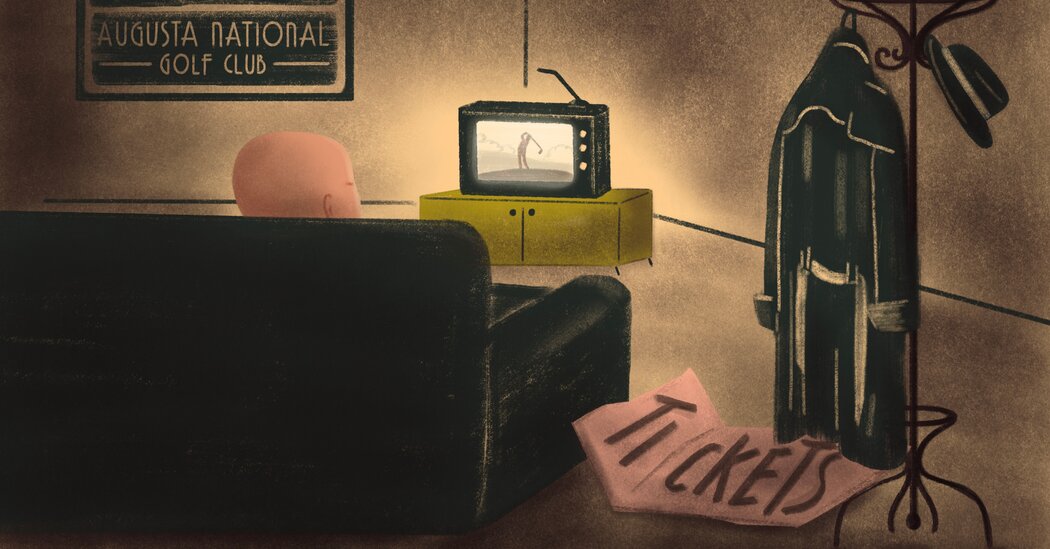 AUGUSTA, Ga. — For about two decades, James DiZoglio has run a bazaar to sell some of the most cherished tickets in sports. His scalping locale has always been the same: near the TBonz Steakhouse and the Augusta Best Inn down the street from the site of the Masters.

But Jimmy D’s Tickets’ traditional space along Washington Road has been empty this week. There are no spectators at the pandemic-upended tournament at Augusta National Golf Club, and so there are no prized badges to sell to would-be patrons, as fans are known at the Masters, for perhaps $2,000 each.

“The Masters is really, in my estimation, the biggest ticket in the world,” said DiZoglio, who estimated that some 40 percent of his business stems from this tournament, golf’s only major held at the same club every year. “It’s a once-in-a-lifetime event for a lot of people.”

This week ordinarily draws well-to-do couples, old men with their middle-aged sons on pilgrimages, corporate titans, aspiring moguls and many others to parking lots, tents and hotel rooms turned offices so they can pay thousands of dollars for daily tickets with face values of $75 or $115.

Now they are not here, their absences a symptom of the crisis for the secondary-ticketing industry this year: With so few live events — and fans mostly barred from the ones that do happen — there are even fewer tickets to resell. Since the coronavirus pandemic began to grip the United States in March, just ahead of baseball season and the N.C.A.A.’s basketball tournaments, many brokers have seen revenues fall sharply. At the same time, they have faced demands for refunds, which has strained balance sheets and prompted them to turn to layoffs, furloughs and emergency grants and loans.

“Everyone is trying to navigate this runway and stay in business so that when the industry comes back, they’ll be in a position to get back to what they did before,” said Gary Adler, the executive director of the National Association of Ticket Brokers.

The Masters-linked malaise extends well beyond ticketing. The Augusta region traditionally relies on the tournament for an infusion of many millions of dollars to prop up hotels, restaurants, as well as bars and their employees.

This year, hotel rooms that are normally sold out during the Masters are vacant, available for less than $100 a night. Step into some restaurants in downtown Augusta, along the Savannah River, and you might find fewer than a dozen customers at the height of dinner hour. Traffic is barely a concern.

And there is not a ticket seller in sight to close deals or make sure existing ones proceed smoothly.

“A normal week would be being on the ground and being there for my clients,” said Amy Stephens, who said her company, Amy’s Tickets, draws about half of its revenues in conjunction with the Masters.

“It’s stressful and it’s hard and we don’t sleep much,” she added. “But it’s just the best week. Everyone who comes to the Masters is happy.”

Still, even before the pandemic, the broader secondary-ticketing industry was facing pressure, partly because of declining attendance in some sports and an increase in direct sales by teams and event promoters. TicketIQ, which tracks resale data, found, for instance, that nearly two million N.F.L. tickets were offered on the secondary market in 2013. In 2019, the number was closer to 600,000.

Beyond being a swift economic trapdoor, the pandemic may have accelerated changes that were already happening for ticket brokers, experts said.

“The way that I think about the secondary market going forward is what it was originally intended for: crazy-high-volume events where demand far outstrips supply and there’s an opportunity for people who own those tickets to sell them and make some money,” said Jesse Lawrence, TicketIQ’s founder.

The Masters will certainly be one of those events once spectators are allowed back in. Indeed, the market around the decorous and curated celebration of golf, Southern hospitality and social status has appeared largely immune from the industry’s shifts, mostly because of how Augusta National sells Masters tickets.

Rather than simply put the tickets on sale at a box office year after year, club officials effectively organize a lottery for entry to the tournament. Series badges, which allow someone to buy tickets each year, are “fully subscribed,” according to Augusta National. The waiting list for those badges has been closed since 2000, when it reopened briefly for the first time since 1978.

The system has made ticket scarcity as much a Masters tradition as the pimento cheese sandwiches ($1.50 apiece at last year’s tournament) — and turned the tournament into a beacon for scalpers, who oftentimes procure tickets from rule-defying series badge holders, and buyers alike.

Since Augusta National announced this year’s ban on patrons, Stephens, who mostly works with companies that buy tickets for employees or valued clients ahead of the tournament, has spent much of her time refunding sales that she said were collectively worth hundreds of thousands of dollars. Properties near the club that she rented out for the tournament are sitting empty.

“It’s like a tight ball of yarn that we’re unwinding,” she said. “I’m a person of faith, and I don’t know why, but I’ve handled this really well.”

Other brokers assuredly have less liquidity and have buckled. Some have declared bankruptcy, and experts believe more will follow.

Although DiZoglio described Masters scalpers as “the stronger of the lot,” the resale industry has long been replete with stress that has sometimes reached tragic extremes. In 1997, the year Tiger Woods first won the Masters, a broker who could not fill an order for about 100 badges killed himself.

More commonly, brokers eye weather forecasts and hope washouts don’t render tickets useless or relegated to bargain-basement prices. “A week’s worth of rain could destroy a lot of brokers,” said DiZoglio, who added that he had enough in savings to manage without a Masters this year.

DiZoglio also said that he had lost a family member to the virus, and that he did not begrudge Augusta National for a decision rooted in public health recommendations. “You can only be so selfish,” he said. “I can use a year off anyway. Things seem to work out for the best.”

Although Augusta National rolled sanctioned ticket purchases from this year to next April, the nature of the pandemic means there is no certainty that the club will be able to welcome spectators in the spring. The club’s chairman, Fred S. Ridley, made no commitments this week.

Some brokers were skeptical that potential advances like a vaccine or improved and increased testing would instantly prompt the club to reopen its gates, particularly if the coming months prove especially tragic.

“Is Augusta really going to be able to pull it off with fans in April, as we come out of a winter when it looks like we’re going to have a ton of cases?” Stephens asked before the tournament started. “I don’t think the storm is over.”