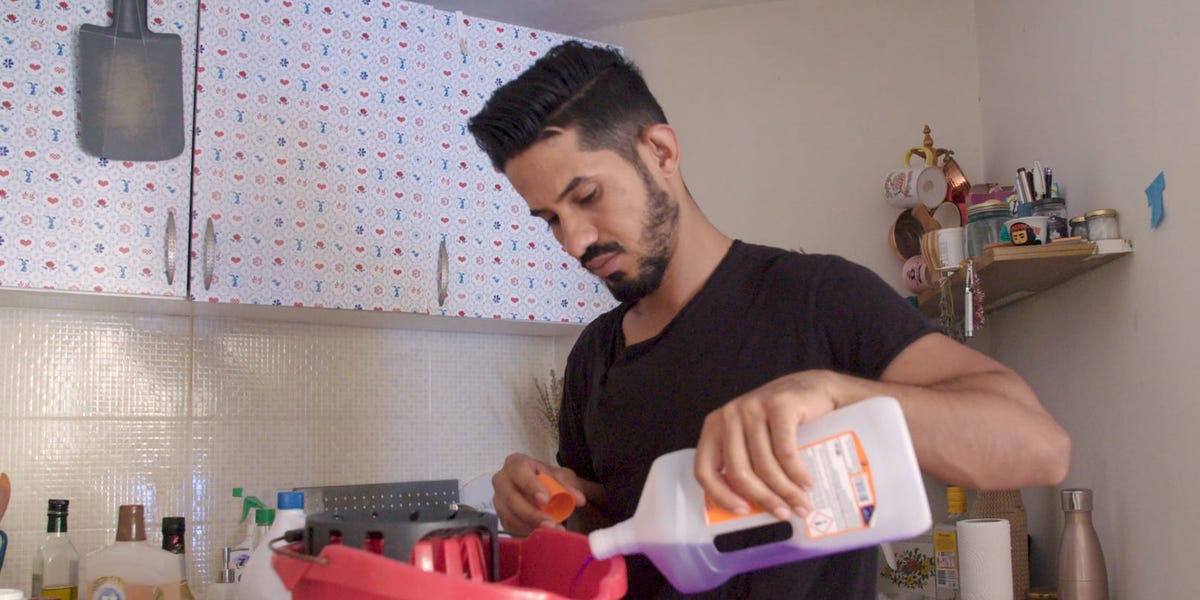 On a good week, Mohanad cleans up to five houses in Istanbul where he lives.

As a refugee, he’s one of the lucky ones.

He managed to find a job with the cleaning company A Clean Start within months of arriving in Turkey from neighboring Iraq.

“It is difficult to find a job in Turkey because there are lots of refugees. I consider that Clean Start saved me,” Mohanad, who asked to use only his first name for his safety, told Business Insider Today. “It provided tremendous support.”

A Clean Start is a cleaning service in Istanbul that was both founded by refugees and employs refugees.

The business launched in November 2018 and has been growing steadily since.

“So we started by asking friends of our friends if they want to hire someone for $10, $20 a day,” founder Abdulwahed Kabakibou said. “And then we started to find people from our community center who’s looking for jobs.”

In 2018, the 26-year-old Mohanad fled Iraq, which has been ravaged by war and corruption. His family is still in Baghdad.

Leaving home was not an easy decision for him. He was a martial arts trainer, even competing for his country in regional championships.

“I would sleep and practice sport,” Mohanad said. “I wanted to become an expert in martial arts, a trainer, and also a physical therapist, but because of what happened after the fact that I left Iraq, I had to renounce it.”

At first, Turkey wasn’t his preferred destination. He was headed for western Europe, but he was arrested in Greece after paying traffickers for the sea crossing. He was then sent back to Turkey, where he was sentenced to a year in prison for illegally crossing the border.

He only served one month of his sentence because he became ill. Turkish authorities released him on the condition that he remain in the country.

Turkey is home to an estimated 4 million refugees, with as many as 3.6 million of them from Syria.

Kabakibou, the founder of A Clean Start, fled to Turkey from the Syrian city of Homs in 2016.

“I fled here because of the war in Syria,” he said. “And I’ve been asked to go to military service, but I didn’t want to join the regime’s army. ”

By the time Kabakibou fled, his home city was being reduced to rubble. Thousands of people have died in Homs alone while the country’s nine-year civil war rages.

Kabakibou had studied to be a pharmacist in Syria, but to survive in Istanbul, he worked a variety of jobs until he saw an opportunity in the cleaning business.

A Clean Start has employed at least 35 refugee workers since it started, and it has built up an increasingly international list of clients.

Tasneem Anjarwalla, an American living in Istanbul, wanted to help — and get her apartment cleaned.

“I feel more and more that if I’m going to be paying for a service, I want to make sure that the money that I’m paying is going toward something that I believe in,” Anjarwalla said.

“Just because you’re here as an immigrant or as a refugee doesn’t mean that you necessarily don’t have the capabilities to do the work that you’ve been trained to do, but it’s just that you can’t find it.”

Not everyone is so welcoming. Mohanad says he faces racism and discrimination on a daily basis, including one incident in the Istanbul district of Kadikoy.

“There are lots of racist opinions against refugees,” he said. “Once I was in Kadikoy, four young men and two young women attacked me. One of them threw a rock at me, asking me, ‘Are you an Arab, are you Syrian?'”

Still, A Clean Start has afforded Mohanad an opportunity not many come across.

“I improved my language skills in Turkish and in English. And it allowed me to know different neighborhoods, how to go there using public transportation,” he said. “It also allowed me to meet customers. I made friends among customers.”

During the height of the pandemic, A Clean Start was forced to close for a few months. But business is picking up again.

Mohanad and the team have had to adapt to health measures like wearing gloves and sanitizing at every opportunity. But COVID-19 is not the only worry on Mohanad’s mind.

“Of course I am scared. As a refugee I can be deported at any time,” he said. “If I get a fine or if there is a problem, even if it is not my fault, even if I did not cause anything.”