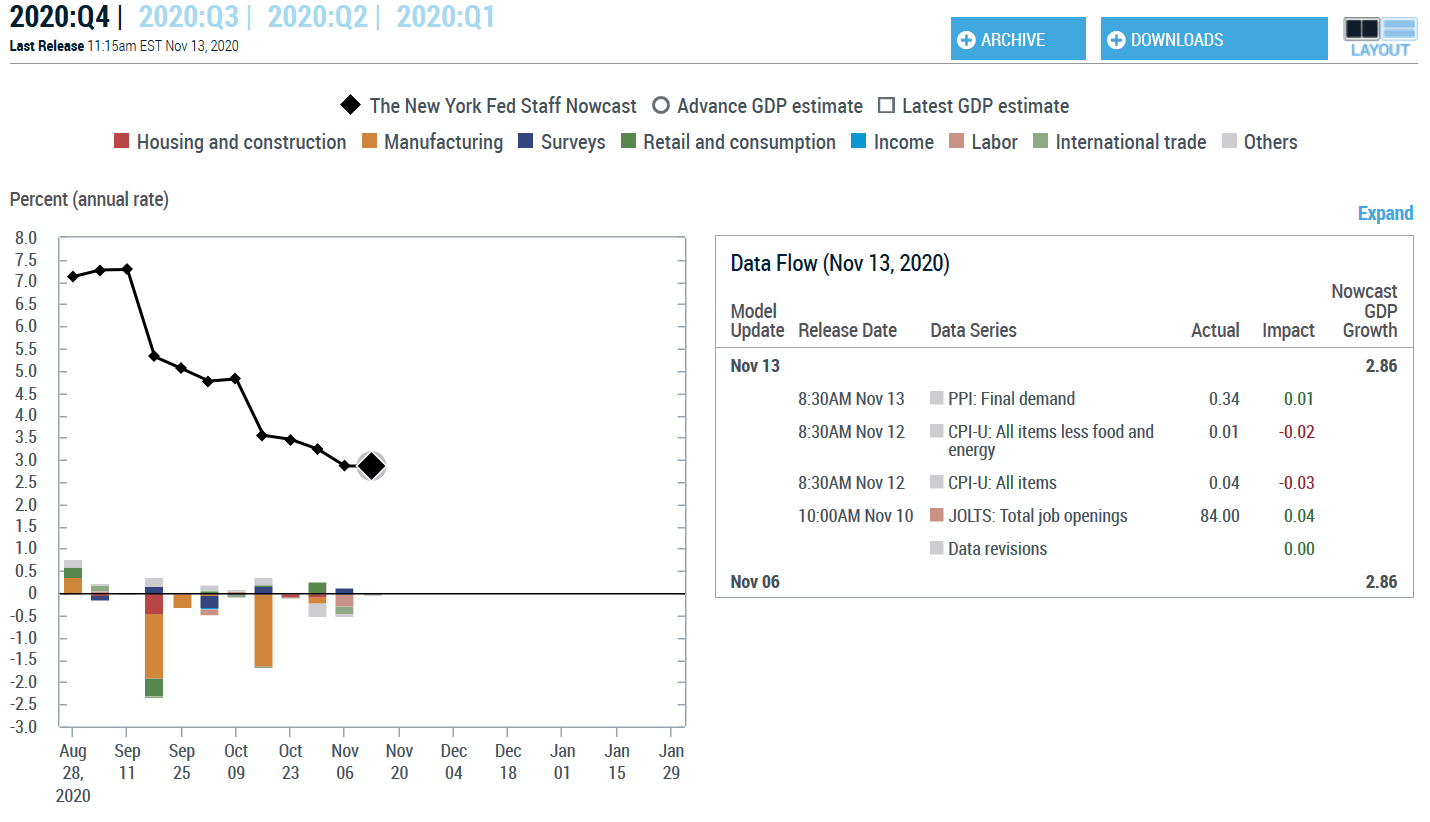 As this post focuses on the Fed, there is no investment thesis. But it’s imperative for investors to know what the Fed is doing and thinking because of their central role in setting rates. 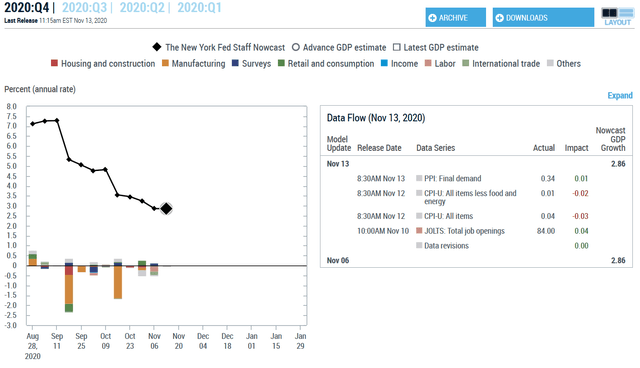 Currently, it’s at 2.86%. But the key issue is that it’s been decreasing sharply since August. 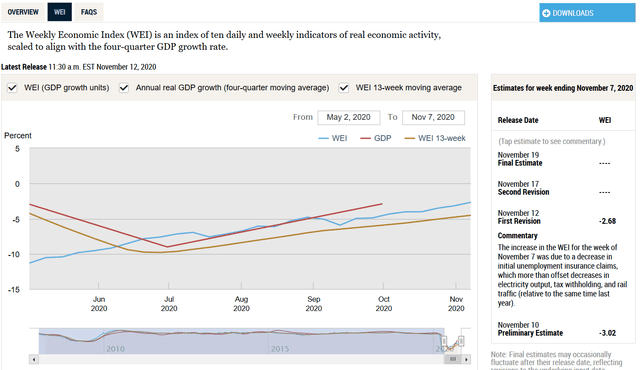 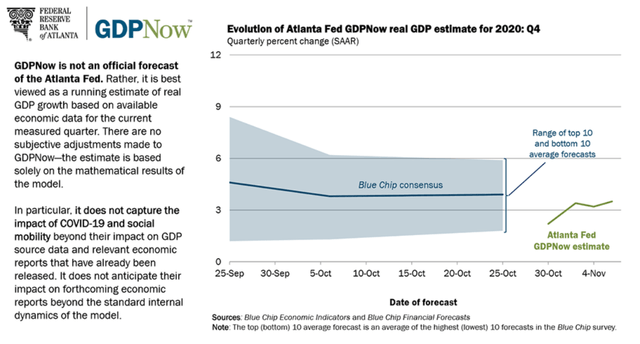 Central to the above projections is that 4Q20 GDP is projected to be far lower than the 3Q20 blowout.

Inflation is a non-issue: 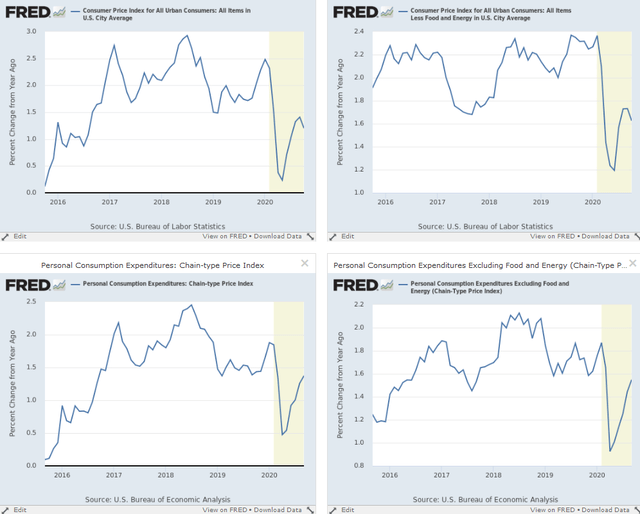 The top charts are the CPI index while the bottom charts are the PCE price deflator. The charts on the left are for the total data while those on the right are core. All data is Y/Y. All charts show a very tame inflation picture. And remember – the Fed will let inflation run above 2% in order to raise average inflation.

The fundamental data point towards a dovish Fed.

This week, Fed Chairman Powell made two key observations about the economy. The first is the long-term damage caused by the pandemic (emphasis added):

“It’s women who are not by choice out of the labor market,” Powell continued. “It’s kids who are not getting the education they should be getting. It’s small businesses with generations of intellectual capital that is being destroyed, and it’s just workers who have been out of work for a long period of time and losing their connection to the labor force and losing the life that they had.”

Here’s a chart of the labor force participation rate for women:

The rate started to drop at the turn of the century as the labor force skewed older, which meant that retirements were increasing. But the number dropped sharply earlier this year and hasn’t returned to previous levels.

A recent story from the BBC shows the negative impact of school closings on children (emphasis added):

I haven’t been able to find reliable data on small business closures but feel certain it’s been widespread.

Powell also observed that the pandemic will fundamentally change the economy (emphasis added):

“We’re recovering, but to a different economy,” Powell said during a virtual panel discussion at the European Central Bank’s Forum on Central Banking.

The pandemic has accelerated existing trends in the economy and society, including the increasing use of technology, telework and automation, he said. This will have lasting effects on how people live and work.

While technological advances are generally positive for societies over the long term, Powell said, on a short-term basis they create disruption, and as the market adjusts to the new normal the pain isn’t shared evenly.

For some time, business downplayed the idea of tele-work. That is no longer the case. The pandemic forced business to adopt that model which has been far more successful than older leaders thought it would be. Expect this concept to remain as part of standard business practice going forward.

Two Fed members were pleasantly surprised about the strength of the economic rebound. The first was Loretta Mester:

“Mester also said that the economy rebounded more strongly than she expected, but gains have not been evenly spread.”

The second was James Bullard:

Fed President Williams was positive but less bullish than Mester or Bullard:

“The U.S. economy is on a positive trajectory, but it is still in a “deep hole” and a rise in coronavirus infections could slow growth, New York Federal Reserve Bank President John Williams said Friday.”

Here’s a chart of the data:

Real GDP has rebounded about 70%.

Despite this positive news, however, the Fed will be on the sidelines for at last 12 months and probably 24.

Disclosure: I/we have no positions in any stocks mentioned, and no plans to initiate any positions within the next 72 hours. I wrote this article myself, and it expresses my own opinions. I am not receiving compensation for it (other than from Seeking Alpha). I have no business relationship with any company whose stock is mentioned in this article.