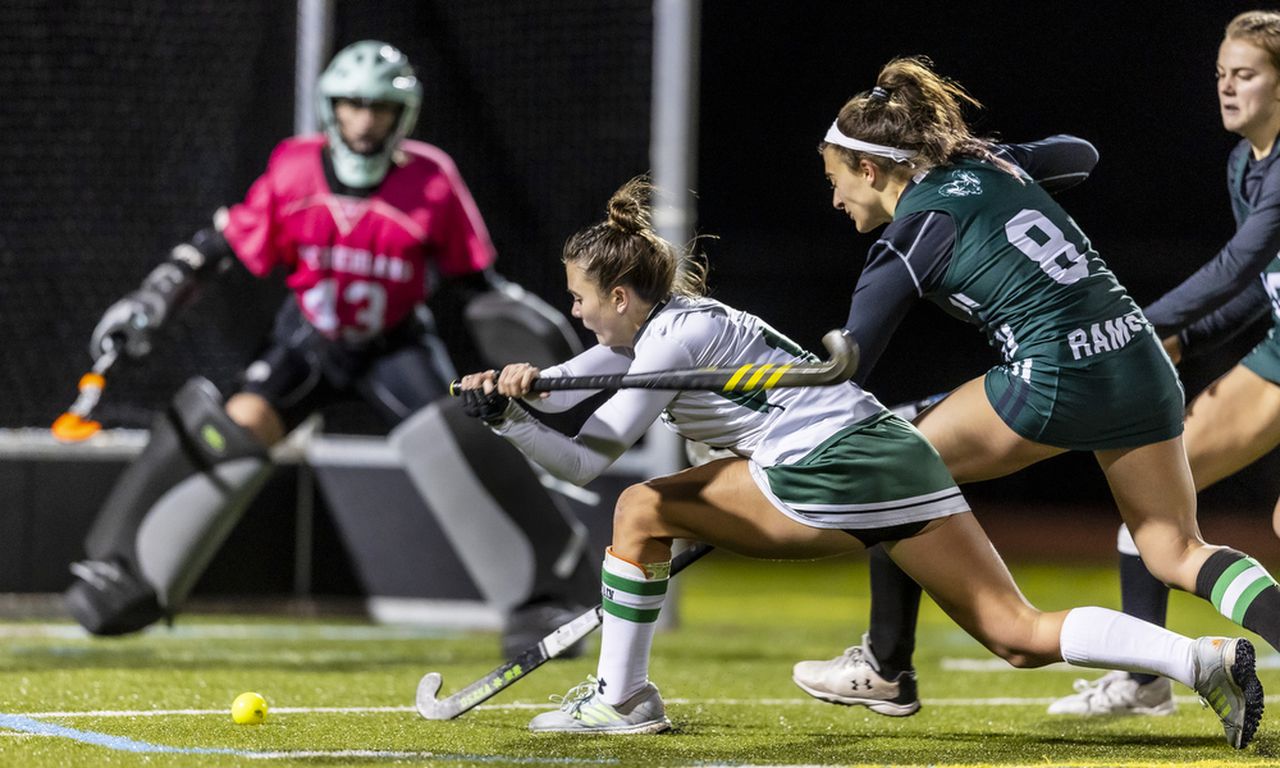 Central Dauphin’s field hockey team gathered for a quick picture at Landis Field on Tuesday night and groaned when they had to return to their spots and do it again.

The Rams have been mission-oriented since Day 1 of an uncertain 2020 season, and they just accomplished another big one with a 5-0 win over Pine-Richland in the semifinals of the PIAA Class 3A field hockey championships.

The mission after the final whistle was two-fold: get out of the mid-30s temperatures and swirling winds, and reset their sights on their most important task yet: a matchup with Emmaus in Saturday’s state title game.

The Rams wasted no time to dash for cover and get back to the grind that got them here.

“We’re focused,” sophomore forward Maya Williams said. “We made a goal after our first game that we would be state champions this year. We said, ‘We’re doing it,’ and this year, we’ve just been executing every single game, doing our business, getting our job done, and finishing.”

Central Dauphin did its job in the first half with constant pressure on the Pine-Richland side of the field, but the finishing part was elusive.

The Rams got five opportunities off corners and blasted six shots to Pine-Richland’s one in the first two quarters, but still went into the half in a scoreless tie. Coach Alicia Pronick said she reinforced at the intermission that outplaying Pine Richland wouldn’t mean much if the opponent creates even just one opportunity off a counter and capitalizes.

That message connected in a big way as star forward Hope Rose found the back of the net at the 32:28 mark and again at 36:55, then Williams stretched the lead to 3-0 with a sprawling reverse shot at 43:57.

The urgency to finish showed, and Hope was the force that got it all started. The Maryland signee showed again Tuesday night that she only needed a crease to unleash a rocket from anywhere in the circle.

“It was [frustrating], and we had to play through the freezing,” Hope said. “It was really cold, but we eventually got what we needed to get done and got more goals than we needed.”

Two more after that didn’t hurt.

Rose scored her third at the 48:42 mark off an assist from senior Emmy Tran, then senior Bella Culp struck at 54:40 to open a 5-0 lead with just over five minutes to play. The Rams had to fight to preserve the shutout late, but steered clear of danger to finish off goalkeeper Kerisa Hill’s clean sheet.

Rose was the story again as she peppered the Pine-Richland goal with shots and added three more goals to her impressive list of accomplishments, but she and Pronick were quick to spread praise elsewhere.

Central Dauphin maintained control for much of the night with strong midfield play and the defense put the squeeze on Pine-Richland when the action did come to that end of the field. And even on Rose’s first goal, she had a helping hand that didn’t show up in the box score.

“I had my midfield Bella Culp telling me the goalie went out, and she was really far out, so she said, ‘Shoot it,’” Hope said. “So, I shot it and it went in.”

Senior midfielder Hannah Guarante delivered a series of precise passes off corners and registered two assists on the night. She helped set up Williams’ goal with a long-range pass into the circle that Williams converted with the reverse side of her stick.

“That was the first reverse I’ve ever done,” the promising sophomore said.

Central Dauphin’s journey to this point took all the unsung heroes rallying around one of the best scorers in the nation.

The Rams survived a gauntlet to earn the lone spot District 3 would have in a condensed PIAA tournament field. The Rams knocked off the District 7 champ Tuesday night to reach the PIAA finals for the first time in school history.

“We’re really grateful to be able to be playing this late in the season,” Pronick said. “All season, we reminded them that we’re lucky to be here and lucky to be together and to enjoy every moment.”

That attitude was apparent in the aftermath of Tuesday night’s win with an immediate realization that one more business trip remained before the real celebration could begin, hopefully in warmer weather.

“For us, it’s always business as usual,” Pronick said. “We come in, we practice. We do what we need to do, then it’s on to the next game. We’ve had to earn everything, and we’re really just focused on the next job we have to complete.”

Central Dauphin will clash with District 11 champ Emmaus at Whitehall High School on Saturday. That contest is set to start at 3 p.m.