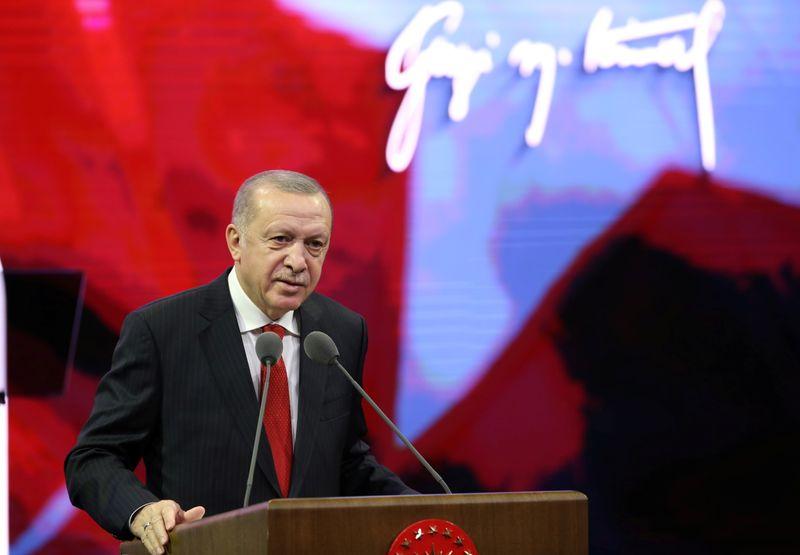 ANKARA (Reuters) – President Tayyip Erdogan said on Wednesday that Turkey’s businesses and employers are hampered by high interest rates but added that lowering inflation is a priority, remarks that whip-sawed the lira ahead of a key central bank decision.

The currency rallied some 12% last week after Erdogan pledged a more market-friendly approach to the economy under a newly installed central bank governor and finance minister. Investors expect a big rate hike on Thursday.

But the lira TRYTOM=D3 slid as much as 1% after Erdogan told business leaders it was impossible to boost employment, exports and production due to “the cost of high interest rates.”

“We have to be much more careful on this point and not allow our investors to be crushed by high interest rates,” he said.

The lira regained its losses when the president – who investors say plays a big role in monetary policy decisions – said in the same speech that Turkey’s main priority is the fight against inflation, which has been stuck near 12% all year.

“Our aim is to reach single-digit inflation right away by maintaining fiscal discipline (and) implementing structural and micro reforms” focused on growth and employment, he said. “We will solve the problems before us in a way that is in line with market economy rules.”

A hike in the central bank’s key rate, now at 10.25%, could stall the economy’s rebound from coronavirus fallout but could also help avert a broader balance of payments problems by boosting the lira.