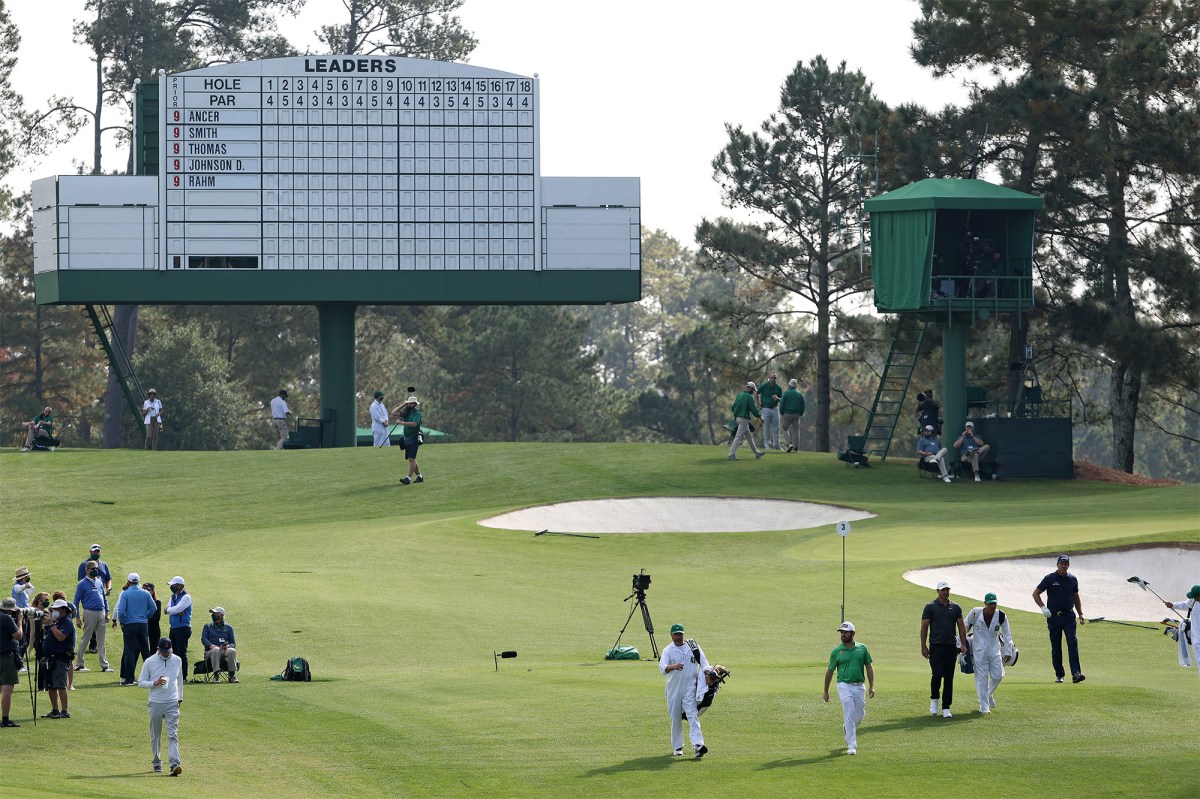 When I was a kid, my dad occasionally took me to Aqueduct, where one day we hung out downstairs — near the rail and the railbirds of all financial standing, barons to bums. I wanted to see the one jockey I knew of, the great Angel Cordero, ride from close up.

In Cordero’s first race, his mount finished out of the money, and as he and his horse headed back I couldn’t believe the hateful words being hollered at him well within earshot, from, “You bleepin’ monkey man!” to, “You’re a bleepin’ thief!”

I was stunned, upset. Why? My dad explained that those men had bet on Cordero and had lost their money. Four or five minutes earlier, he further explained, they thought so much of Cordero they bet on him; now they despised him.

It was then I learned to follow the money.

Thursday, during the first round of the first COVID Masters, a CBS/ESPN telecast, players who finished were interviewed, all of them asked to describe what it was like to play on a near-empty course.

They agreed that it was strange, that they missed the up-close excitement the gallery provides. The TV commentators throughout the telecast were of a like opinion.

And that made me wonder if any of them knew what was likely coming when PGA events return to “normal,” or at least a new normal.

Since the COVID pandemic began, the PGA and especially NBC’s Golf Channel have worked tirelessly to catch up to those sports that have immersed themselves in legalized gambling, in order to receive their cut of a business entirely predicated on fans losing their money.

If you don’t have a bet or two (or three) on a game, you’re now a second-class fan.

Golf, however, is different. Where the losing gambler can direct his or her ire — even hatred — at a losing football or basketball team, most golf bets are placed on individuals, thus the vitriol of bad losers will not be shared. That’s why pro tennis is so vulnerable to match-fixing.

Add booze to the golf bet and live galleries, previously occupied by those starved for attention by screaming, “You da man!” and, “Get in the hole!” can verbally attack a player after, say, a double bogey, and from just a few feet away. After all, public civility in any arena has been trending extinct.

I suspect we saw evidence of this last year when the popular Jason Day withdrew from Bay Hill after six holes because of his chronic bad back. Advised by doctors to stay active, he then took his wife and three kids to nearby Disneyworld, where he was photographed, a photo that soon hit Twitter.

Day was then vilified on “social” media as a dog, a quitter faking an injury. Who else would be driven to such an excessive conclusion than those who had bet on Day?

To GolfMagic magazine, Day said, “It’s like when you have a fan yell at you on the golf course. You can’t — you want to go over there and get into him, but unfortunately it makes you look bad. That’s the same with social media.”

At the close of that piece, which was very supportive of Day, appeared a come-on that read, “Golf Betting Tips, The Players Championship 2019.”

I hope I’m wrong about where pro golf is headed, but we’ll see. I wouldn’t bet against it. Follow the money, even the worst kind.

YES, it was weird when Jackson quit on air

The inexplicable firing last week of three valued, longtime YES Network employees — Nets analyst Jim Spanarkel, and Yankees producer/director team of Bill Boland and John Moore — brings to mind the night of April 16, 2008, the final game of another desultory Nets season, a loss to the Celts.

Late in the telecast on YES, third-year analyst Mark Jackson blew the minds of YES executives when he casually — and bizarrely — said that this would be his last Nets telecast, he was leaving YES.

No one at YES knew that. Though Jackson had become a professional communicator, his communications with YES had been poor — he previously hadn’t bothered to inform YES that he’d be a part-timer, as he had accepted an offer to call NBA games on ABC/ESPN.

Not that many were watching that night, but Jackson dropped a farewell bomb on YES that left a crater. Not many conduct their exit interviews on the air.

I’m tired of writing it every year, so this time I’ll let reader David Sacco handle it:

“ESPN has the greatest golf tournament at the most iconic course in the sport, and instead of showing us golf, we have to watch Scott Van Pelt and Curtis Strange telling us about how great it is.”

I suspect that Van Pelt and Strange would be annoyed by such non-coverage TV coverage, too.

Reader Rich Kinley: “Had there been ‘instant’ replay in the 1972 Steelers-Raiders ‘Immaculate Reception’ game, the officials still would be reviewing it.”

As seen on CBS’ Steelers-Cowboys, there’s a new needless, misleading, subjective stat to consider: “Pressure Rate.” Of course, some plays are designed for the QB to be pressured; they used to be known as screen passes and pitch-outs.

Francisco Molinari was out of it early, this Masters, thus CBS and ESPN were able to ignore both him and the complete story of Tiger Woods’ “amazing comeback” to win last’s year’s Masters. That win was aided and abetted by Molinari — who, about to ascend to No. 1 in the world, had a two-stroke lead, but double-bogeyed 12 and 15.

I’m worried about the Nets. They haven’t announced the addition of another assistant coach in almost two days.

Party like it’s 2017: The last time the media extended the kind of blind love it has bestowed on Steve Cohen, was when the Mets re-signed Yoenis Cespedes.

I don’t want to say his wife was on the heavy side, but his obituary read, “He died surrounded by his wife.”