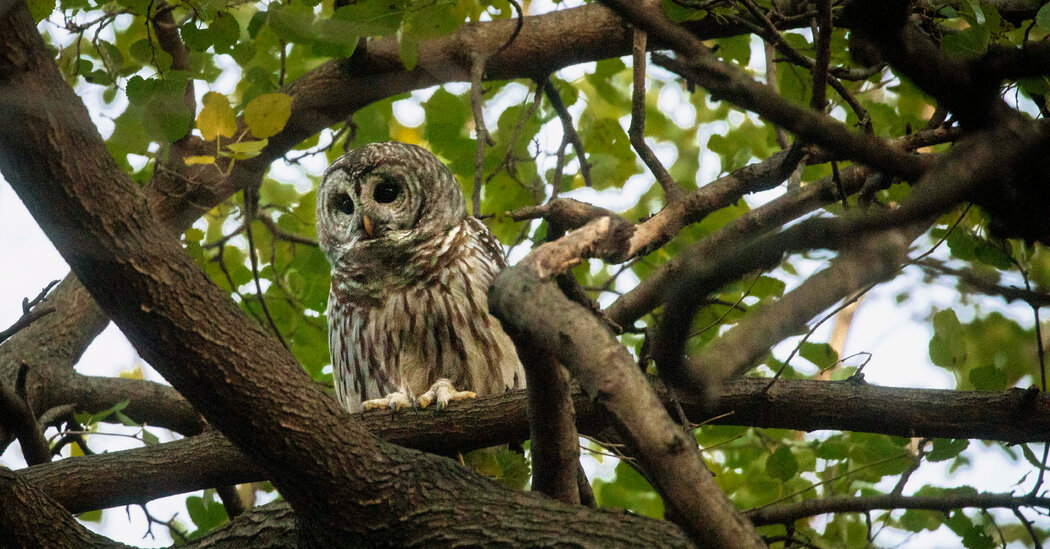 It was late afternoon in the North Woods of Central Park, and the sun was setting fast. Joshua Kristal, a photographer with a penchant for birds, was starting to feel despondent as he searched along the creek, looking for any movement. This was the third time he’d traveled more than an hour from Brooklyn to see Manhattan’s newest celebrity bird: an ethereal and majestic barred owl.

Currently known as Barry, the owl has intense black eyes and elegant poufs of white feathers streaked with brown and gray. He looks like a perfect stuffed animal from a high-end toy store. But Barry is also unusual. Though owls are typically nocturnal, he makes regular daytime appearances, and has become something of a performer. Practically vogueing, he stares, preens and swoops into the shallow stream to wash and flick his feathers. Barry will turn his head 270 degrees right and left and up above to check for his archenemy, the hawk. He plucks chipmunks with his talons and devours them, seemingly unfazed by adoring fans and the paparazzi, many of whom have already made him Instagram-famous.

Knowing all this made Mr. Kristal even more frustrated that he couldn’t spot Barry. “I was stewing, thinking, What’s wrong with me? Why is everyone seeing the bird except me?” Mr. Kristal said. “But then, all these people passed me and said, ‘Have you seen him?’ And I realized, in my quest to find the owl, I wasn’t the only one failing. And I’m a terrible birder.”

Barry the Barred Owl was first spotted on Oct. 9 by a group of devoted birders including Robert DeCandido, a New Yorker who has conducted bird walks in Central Park for some 32 years and is known as Birding Bob. The owl was an overnight sensation, not as flamboyant as the Mandarin duck two years ago but no less magnetic. Birders flock from all over to the Loch, a creek near 103rd Street and Central Park West, for a chance to see Barry.

Owls are more common in the city than people realize, and they have been spotted in every borough, Mr. DeCandido said. In Central Park, though, only one or two owls are usually spotted in a year, he added, and Barry is believed to be the only one in Central Park at the moment.

Barry most likely flew in from up north for a warmer temperature in which to hunt, but “only God knows,” Mr. DeCandido said. Barry is not nesting, as owls haven’t been found to nest in Central Park. He is roosting and putting on weight.

As social media bird alerts have become popular, there are more unique and rare birds reported in the city — like a recent sighting of a Virginia rail in Central Park, Mr. DeCandido said. “Before, if you saw something rare, who would you tell?” Mr. DeCandido said. “Now there is E-Bird and Manhattan Bird Alert, where bird sightings are reported almost immediately.”

But there are disagreements among birders on how healthy it is for humans to be stalking Barry, some using recorded bird calls to lure him out, surrounding him (at a respectful distance) and brandishing their cellphone cameras to capture the perfect image of a creature who typically does not like to be bothered.

Mr. Kristal learned of the owl from Manhattan Bird Alert, a Twitter feed that posts bird sightings throughout the city. When a Barry alert goes out, dozens of people show up, and fast. Therein lies the problem, said Dennis Hrehowsik, president of the Brooklyn Bird Club, based near Prospect Park. Owls are much too sensitive to be thronged, he said.

“I haven’t gone to see an owl in years,” Mr. Hrehowsik said. “If I hear about it, I won’t go. It doesn’t need the added stress,” he continued. “Owls are special. They look different, they act different, they seem magical.” Of course, this is why humans are drawn to them. As for the interest in photographing Barry, Mr. Hrehowsik said that he is concerned that the owl, rattled by the activity, “will leave and try to migrate before it has enough sustenance.”

Birding in the city has grown more popular during the coronavirus outbreak, said Mr. Hrehowsik, who has led hundreds of bird tours. The quiet, meditative search for special birds — as many as 300 species of which live and migrate through New York City — can be soothing. And it’s a fresh-air activity, a key detail when it comes to safe pandemic pursuits.

Last weekend, Wendy Iraheta, of Harlem, waited patiently with her camera for well over an hour to see Barry; her friends had waited for hours longer. She said her quest to see him has become “an obsession.” Ms. Iraheta, in business development and marketing, said she visits often. She had posted a video of the owl preening and was really proud of it.

“It melts your heart,” she said. “It’s pretty much one of the cutest things I’ve ever seen.”

Janet Lee, a novelist from Harlem, was wandering nearby, craning her neck to look into the trees. She said she was yearning for another glimpse. “Those eyes!” Ms. Lee said.

Coming upon an owl accidentally is a great thrill, most bird lovers would agree. But publicizing the location of sensitive species, Mr. Hrehowsik of the Brooklyn Bird Club said, is not ethical bird watching.

David Barrett, who runs Manhattan Bird Alert, said he does not think observing the owl stresses it. He defended his practice of alerting people.

“This is the information age. People can report what they see,” Mr. Barrett said. “You don’t get owls every day in Manhattan. In the middle of a city like this, it’s a reminder that there is mystery and beauty in nature, and we need to go see it.”

Mr. DeCandido said the Brooklyn Bird Club is wonderful in the work they do, but they guard the location of birds jealously. “They’re like the mafia,” he said. “They keep things really secret.”

Other birders, meanwhile, have taken issue with Mr. DeCandido’s techniques to lure Barry out into the open by using recordings of owl hoots.

Mr. DeCandido said that he is simply bringing humans and birds closer together. “The more people see this, the more they’ll like owls, and the less they’ll want ice-skating rinks and things that reduce what owls need, which is woods.”

Mr. Kristal, the photographer, was not aware of the tense opposition; he just wanted to see Barry. So, after his third failed solo attempt, he paid $10 to go on an owl walk with Mr. DeCandido.

That did the trick. After 45 minutes, Barry swooped in and landed on a branch.

“It was exhilarating,” Mr. Kristal said. “I felt like I was cheating, because I wanted to find it on my own. But I had to see that owl.”

Though some birders think Barry is a female, Mr. DeCandido is convinced that Barry is a guy who answers the owl call because he’s looking for a girlfriend. “Owls have to meet people too,” Mr. DeCandido said.

It’s not known if Barry, who was last seen on Nov. 17, will remain. If he doesn’t find a mate, he might decide to stay the winter anyway, Mr. DeCandido said, since food — certainly rats and chipmunks — are plentiful.

Or he might head to the suburbs, he continued. “He might decide, ‘This ain’t the place to meet women, I’m moving to Jersey City.’”