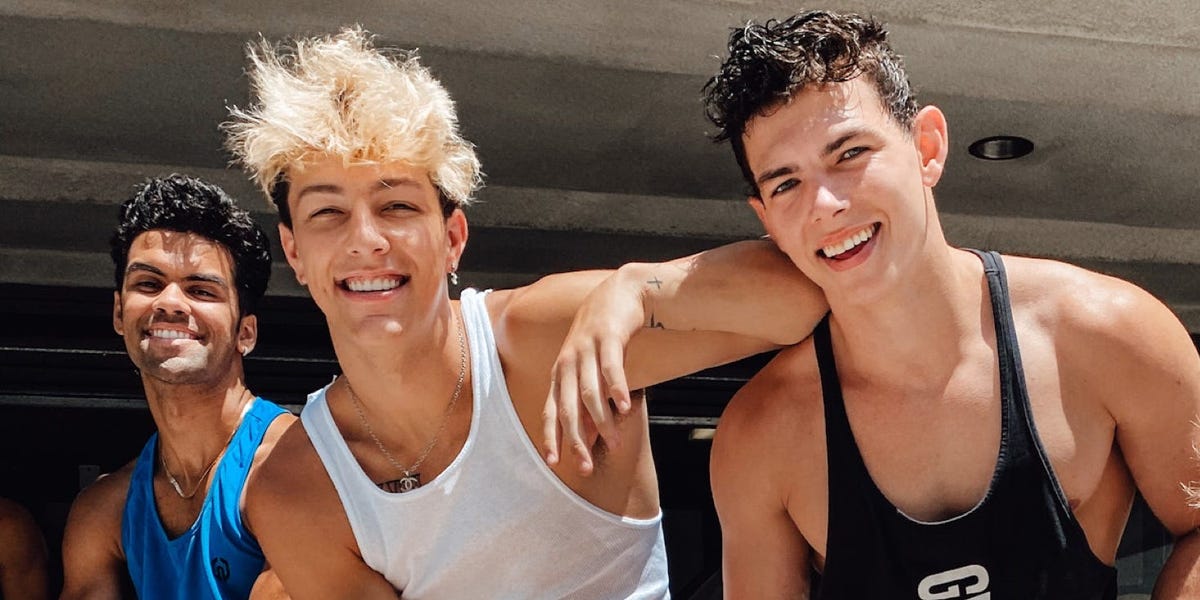 On October 13, Alex Hager uploaded a video of himself doing a set of wide-grip barbell curls on TikTok.

In the post, which has garnered over 100,000 views and around 9,500 likes, the 24-year-old fitness trainer offers tips on lifting form. But in the video’s comments section, a lot of the attention is on another TikToker in the background, Blake Gray, whose arms flop up and down as he practices a coordinated dance.

“Blake do be vibing in the back,” one TikTok user wrote.

Gray, along with his roommates, are collectively known as Sway LA and are some of the biggest TikTok stars in the world with tens of millions of combined followers. Hager has far fewer — around 250,000. But his frequent videos with the group have helped raise his TikTok profile this year and boost his business.

Hager isn’t paid by members of Sway LA for his training tips and said he counts them as friends. But the workouts with Sway LA and another wildly popular TikTok group, the Hype House, have helped Hager grow his social following, win sponsorship deals with brands, and promote his paid digital fitness program “Six Week Shred.” One of Hager’s TikTok videos advertising the program at a $10 price point drew 15,600 “likes” from users.

“My sales went up within two weeks of posting TikToks with these guys and then getting into YouTube and then posting [Instagram] Stories all the time,” he said.

Hager declined to share how much his program’s revenue grew once he began filming with the group. But he did share screenshots with Business Insider that showed new user sign-ups growing about 250% month-over-month between June and July 2020.

Like many fitness influencers, Hager also makes money from brand sponsorships on his social accounts. He recently pitched AfterShokz bluetooth headphones on TikTok and a zero carbohydrate protein drink on Instagram.

Like many of its stars, Hager’s TikTok career began taking off as attention moved online during the coronavirus pandemic

Hager’s rise to TikTok fame came at a moment when his other career plans were in flux.

At various points, Hager has worked as a fitness trainer, computer engineer, dabbled in singing, and even recorded how-to tech videos. He said he always tries to have “multiple eggs in multiple baskets.”

He’s also no stranger to LA’s social-media scene. Hager said he knew Hype House cofounder Thomas Petrou back when he was a member of the YouTube group Team 10, and Hager was active (though far less popular) on YouTube himself back in 2016.

In March 2020, Hager was working on a freelance software project while promoting his just-released “Six Week Shred” program. But both income streams dried up when COVID-19 began surging in the US.

“When the lockdown happened, I lost that software job,” he said. “I lost my other income, and I wasn’t really training anyone at the time. I was broke with no gym and a fitness program when gyms were closed.”

But Hager bounced back quickly. He was able to secure a short-term role doing development work for a new iPhone app. And he began training with some of his LA friends, including the social-media star Tayler Holder, in a makeshift gym he set up in a friend’s garage.

When Holder moved into the Hype House in June, Hager built relationships with other members of the group and began training creators like Nick Austin, Chase ‘Lil Huddy’ Hudson, and Ondreas Lopez. He met Sway House member Noah Beck at a Hype House gathering and they made plans to work out the following day.

“I’m showing up at Sway House [at] 9:15 a.m.,” he said. “Probably have to wake them up. Bryce [Hall] is probably sleeping and his alarm is going off upstairs. The whole house can hear.”

The group’s content has been heavily focused on fitness in recent months (Hager isn’t the only fitness influencer they’ve collaborated with in videos).

Hager said he’s been tested for COVID-19 on some visits to the Hype House, but members of Sway LA haven’t required him to get tested.

TikTok spreadsheets and plans for his own gym

Unlike some creators who upload a stream of TikTok videos throughout the day, Hager posts a few times a week. His videos almost always feature other more-famous TikTok stars.

He uses a spreadsheet to plan out each post based on the exercises he wants to highlight.

He films with a Sony mirrorless camera and said a YouTube video takes a few hours to shoot and edit. TikTok videos, by contrast, take just a few minutes to record, edit, and post.

“I’m all about organization and structure and routine because no one else in the influencer market is,” he said.

As Hager looks for opportunities to expand his business, he said he plans to open up his own gym to train clients rather than visiting TikTokers at their mansions. And he’s also hoping to create more content that’s optimized for at-home fitness, a category that’s taken off during the pandemic.

“More people are actively looking for workout material,” he said. “I do post some at-home stuff on my TikTok that people can use and I am working on new programs that I’m really excited about.”

For more stories on how TikTok creators are using the app to grow their businesses, check out these other Business Insider posts: