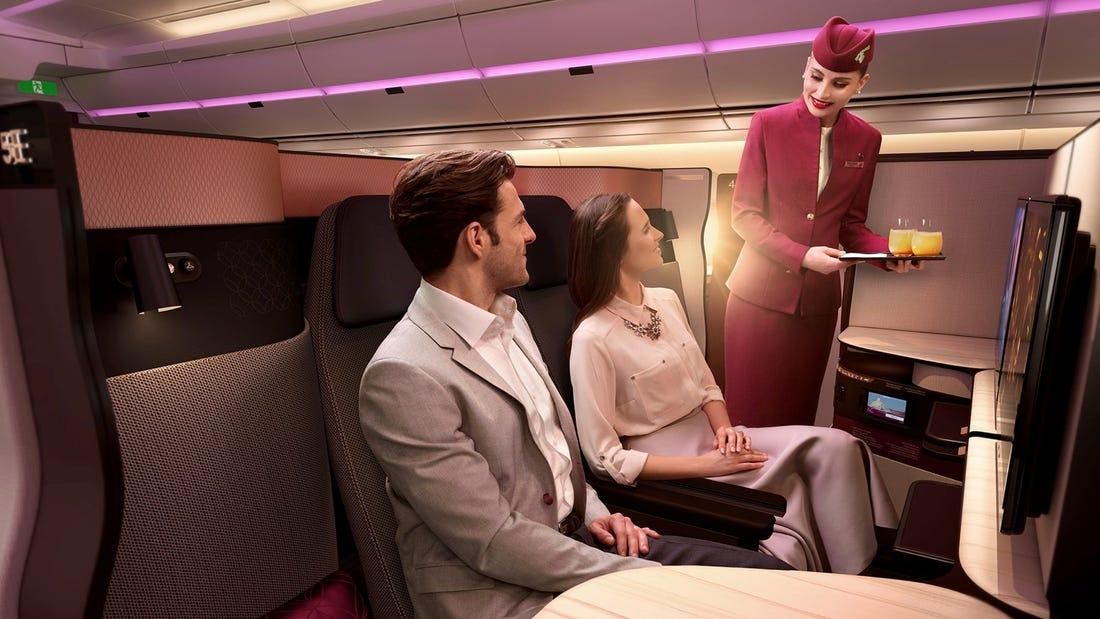 Airlines have added benefits to booking economy tickets due to the COVID pandemic, such as relaxing their change and cancellation policies and waiving some associated fees. At the same time, however, certain carriers are experimenting with a new form of basic business class. Amenities like checked bags, lounge access, and premium meal service have traditionally been bundled into business class fares. But that could all be changing as airlines seek to diversify possible sources of revenue – all while coping with health-related concerns over the facilities and services provided to their highest-paying passengers. Hoping to attract whatever market share remains in these turbulent times, airlines seem to view unbundled business class might as the new version of basic economy.

Based on some recent searches across several routes between the airline’s hub in Doha and both North America and Europe, as well as on some inter-regional routes that include transit in Doha, Business Comfort fares appear to be equivalent to what a typical business class ticket would have cost before this change. Business Classic fares represent a substantial discount, but incur higher cancellation fees, and include two pieces of checked and hand baggage. The option for seat assignments is only available at check-in, and passengers do not enjoy lounge access. Business Comfort travelers receive the same luggage allowance, but can take advantage of seat selection at booking, expect free lounge access, and lower cancellation fees. Finally, Business Elite fares include all that plus free cancellation.

All three fares are not currently available or pricing out on all routes, so your options will vary depending on where you are traveling. However, on routes where the three options do appear, expect differences of well over $1,000 between Classic and Comfort fares, and slightly less than that between Comfort and Elite fares. For example, round-trips between New York JFK and Doha this spring are running around $3,914 for Business Classic, $5,574 for Business Comfort, and $6,263 for Business Elite. That’s a high upsell for a few hours in the lounge and your preferred seat. And there’s no word yet on whether having elite status with the airline or one of its Oneworld partners, like American Airlines, will get you around some of these restrictions.

Interesting as this development is, Qatar Airways isn’t the first international carrier to test such options. In fact, its main competitor in the region, Emirates, considered it as far back as 2016, and began unbundling its business class fares last year. The airline’s business “Saver” tickets restrict seat selection, waive chauffeur service, lounge access, mileage upgrades to first class, and have higher change and refund fees.

European airline Finnair introduced “Business Light” in March. Tickets in the new fare class are non-changeable and non-refundable and do not even include checked baggage (though you can purchase it separately). However, travelers do still get regular meal service and lounge access. Lufthansa is also reportedly weighing its options to unbundle fares in premium cabins once its new business class seats appear aboard its forthcoming order of Boeing 777X aircraft next year.

Though most U.S. travelers have probably not heard of it yet, Japan Airlines’ newly launched lower-cost carrier, Zip Air, debuted just last month with flights from Tokyo Narita to Seoul Incheon and Bangkok. The airline offers four different business-class bundles. “Simple” gets you just the lie-flat seat. “Biz” fares include a seat assignment and a carry-on bag. From there, “Value” tickets include seat assignments, a checked bag and an in-flight meal. Finally, “Premium” seats include all that plus an amenity such as pillows and blankets. What’s interesting about Zip Air’s offerings is that the price increases are really only incremental from fare bucket to fare bucket (the difference from Simple to Premium is a mere $70 each way from Tokyo to Seoul this month, for instance), but passengers can also cherry pick the individual add-ons. For example, seat assignments start at about $3, and meals start at around $11.

Given the segmentation that has been taking place in economy cabins for years at this point, perhaps the only surprising thing about major airlines introducing unbundled business class fares is how late it began, and how slowly it is taking place. As airlines around the world continue to bleed cash due to the COVID crisis and see their premium cabin revenues decimated thanks to the precipitous drop in business travel, many are probably investigating fare restructuring with a newfound focus.

This could mean a few things for passengers. On the positive side, there are likely to be some interesting deals for folks willing to fly at this point who want the pleasure of a lie-flat seat and a decent meal on board without requiring the extra luggage or lounge time. Folks who don’t take advantage of extra services like chauffer transfers or the bragging rights of choosing an exact seat on their flight won’t miss out on the meat of the business class experience, either – namely the high-end in-flight service and a chance to leapfrog out of the economy cabin.

The major downside is that, once air travel begins climbing again, airlines with segmented business class fares in place will be ready to squeeze every last penny out of paying passengers who like or require the extra amenities that used to be included automatically. Not to mention the business travelers who must sometimes purchase tickets with flexible change and cancellation policies, which will now cost quite a bit more.

Overall, Qatar Airways’ announcement is intriguing, if not surprising. As its new fare system goes into effect, expect other airlines to be watching its bottom line closely and wondering whether they can attempt something similar in an effort to wring even more value from both regular business travelers. Doing so might also mean capturing new customers who will be willing to pay piecemeal for the main perks like a nicer seat and meal, but not for superfluous benefits like a higher luggage allowance, or lounge entry. Chances are, more airlines will diversify their fare buckets in the coming months so that travelers will eventually be opting for each extra and add-on à la carte, kind of like the low-cost carrier model made mainstream by airlines such as Norwegian.