The Lady Bears are going to have a tough time playing the disrespect card this season.

Entering 2019-20, the team wasn’t even picked to win the Missouri Valley Conference after going to the Sweet 16 round of the NCAA Tournament — despite returning all but one player.

That motivated the team under first-year head coach Amaka Agugua-Hamilton to go 26-4, become nationally ranked and win the league before the conference and NCAA Tournaments were canceled due to the coronavirus pandemic.

Entering the 2020-21 season, the Lady Bears are receiving plenty of respect.

The Lady Bears will enter the season ranked No. 24 nationally in the Preseason Associated Press Women’s Basketball Poll. It’s the first time MSU has been ranked in the preseason poll since 2000. This time, the Lady Bears were also picked to win the league.

So what’s the motivation heading into season two for “Coach Mox”?

Here are some notes from the Lady Bears’ virtual media day on Tuesday afternoon:

The ending of last season will be motivation

Senior Elle Ruffridge can remember the minor details of when she and the rest of the team first found out there wouldn’t be an NCAA Tournament.

Everything they worked for all season was canceled because of the pandemic. The bus ride back to Springfield after the MVC Tournament’s cancellation was an emotional one.

But the Lady Bears promise to use that as motivation. Agugua-Hamilton said her team isn’t hungry… it’s starving.

“It took us a little bit to realize that we didn’t get to finish our great season,” senior Brice Calip said. “It was more of a motivator. We have unfinished business, so we’re just hungrier to get on the court and play together.”

“We don’t really want to go back and keep talking about that,” Agugua-Hamilton added. “At the same time, we’ve used that as motivation to fuel us early in the preseason and continue to fuel our fire because we have some unfinished business.”

Brice Calip should continue to be among the Valley’s best

Calip was named the league’s defensive player of the year while earning first-team honors. She averaged 12.6 points, 3.6 boards, 3.8 assists and 1.3 steals in 29 games while having one of the best assist-to-turnover ratios in the country.

“Brice is a phenomenal talent,” Agugua-Hamilton said. “She can be a great facilitator and I want her to continue to be that, but I want her to be aggressive because I think she can get downhill on anybody. She’s so physically strong and she can take the hit and her 3-pointer has come a long way.

“Brice is going to continue to do what Brice does and that’s going to have her at the top of the conference.”

Calip was first-team all-conference entering this season after making a big leap in her junior year. She averaged 2.5 more points per game while more than doubling her 3-point output from the season before.

She’s not the most vocal leader on the team, but she’s proven to be the heart and soul of one of the nation’s top programs.

“She’s such an incredible player and teammate,” Ruffridge said. “You should expect great things this year because she’s going to bring it every single game. I think she knows that the expectations are high for her as well as our team and she’s going to go out there and do what Brice does — go out and play hard and do whatever it takes to get a win at the end of the day.”

Jasmine Franklin is ready to score

Calip isn’t the only star in the Lady Bears’ program.

Jasmine Franklin returns for her junior year and she is among the league’s best. The 6-foot-1 forward is maybe the league’s most physically gifted player, and it’s been that way since she was a freshman.

“I feel like she gets more and more athletic every day,” Agugua-Hamilton said. “She’s using her right hand more and she’s starting to drive more and is starting to hit that 15-footer.”

Agugua-Hamilton said one of the main differences going into Franklin’s junior year will be how much the offense goes through her. Franklin wasn’t too comfortable before and got most of her points off rebounds and on hustle plays — but now she’s more comfortable and the Lady Bears will be able to use her in isolation situations.

“She’s ready to score,” Agugua-Hamilton said. “Her mentality is completely different than what it was in the past.”

Franklin was a first-team player a season ago and averaged 10.9 points and 8.9 boards per game.

Abi Jackson smiles after being introduced during a preview event for Missouri State men’s and women’s basketball at the Hammon’s Student Center on Saturday, Oct. 17, 2020. (Photo: Andrew Jansen/News-Leader)

No, the Lady Bears still don’t know if they’re going to have Auburn transfer Abi Jackson available when they open up in Florida on Nov. 27.

What they do know is that Jackson will play at some point this season. It will either be on opening day or it will be Dec. 13 at Mizzou — when the semester ends and she completes a full-year in residency to satisfy NCAA rules.

The NCAA has yet to give the Lady Bears a ruling while paperwork has been exchanged. Agugua-Hamilton only knows that the team will know by opening day whether their transfer will be allowed to play or not.

Jackson will benefit from the NCAA’s ruling to give winter athletes an extra year of eligibility. That will guarantee her a season with the Lady Bears in 2021-22.

Jackson joined the Lady Bears in December after starting 12 games for Auburn as a freshman in 2017-18 while appearing in 59 career games. She averaged 2.4 points and 1.8 boards while shooting 46 percent from the floor. She was the No. 20 ranked forward nationally by Prospects Nation out of high school.

It was recently announced that the Lady Bears will begin their season in Fort Myers, Florida, at the Gulf Coast Showcase — where tough tests await.

The Lady Bears open Nov. 27 against Florida Gulf Coast before playing No. 12 Maryland the next day for what could be a critical NCAA resume-building game if MSU still hopes to earn a Top 16 national seed in the NCAA Tournament. The Lady Bears conclude in Florida on Nov. 29 against Wake Forest.

Agugua-Hamilton said the Lady Bears are still waiting for one non-conference contract to come in after one was canceled late. She said the team will have a home game on Dec. 5 before hosting Lincoln on Dec. 7.

A trip to Mizzou awaits the Lady Bears on Dec. 13 before returning home for a game against South Dakota State on Dec. 19. South Dakota State received votes in the AP Poll on Tuesday and is considered one of the better mid-major programs in the country entering the season.

Post-play was all the talk

The strength and different styles the Lady Bears are going to be able to have in the post dominated the talk during Tuesday afternoon’s Zoom conference.

“We’re all very, very different,” Hipp said. “We all bring lots of different things to the table and we bring great chemistry and cohesion. I feel like we’re going to be dominating some games, so I’m excited.” 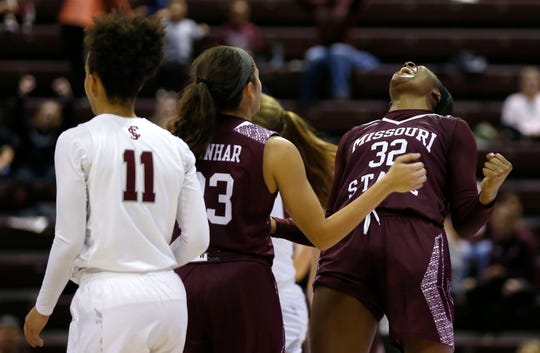 Neither Calip nor Franklin appeared to give much thought to the ruling that winter athletes will receive an extra year of eligibility. The NCAA made that ruling because of the pandemic and the uncertainty surrounding this season.

Calip, a senior, will be one to watch. She’s one of the better players in the league and will have the option of returning to the team in 2021-22 if she chooses.

“I’ve just been thinking of the now,” Calip said. “I think, me personally, thinking about this season and taking it game-by-game will ultimately lead me to my decision.”

“I’m just kind of just going with the flow and seeing how the rest of the season goes,” Franklin said. “Things will change.”

Wyatt D. Wheeler is a reporter and columnist with the Springfield News-Leader. You can contact him at 417-371-6987, by email at [email protected] or Twitter at @WyattWheeler_NL. You can subscribe to his free “Bears Beat” newsletter on News-Leader.com. He’s also the co-host of Sports Talk on Jock Radio weekdays from 4-6 p.m.