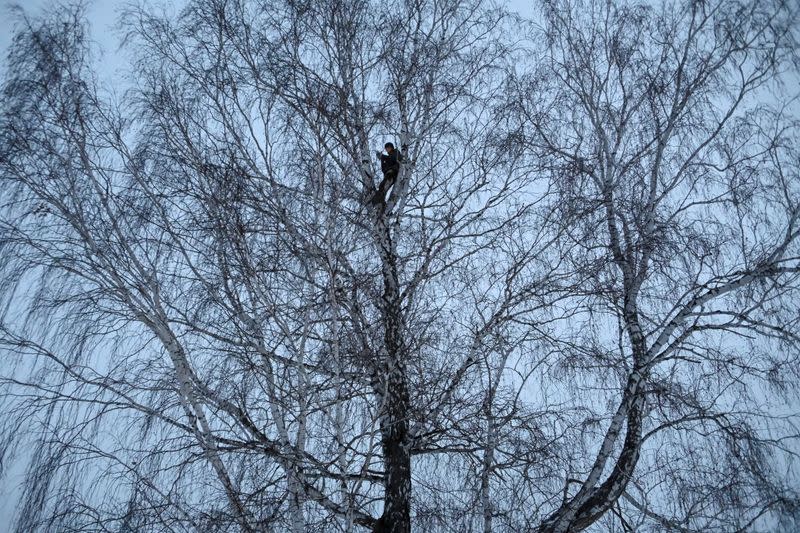 STANKEVICHI, Russia (Reuters) – Russian student Alexei Dudoladov has been forced to go to great lengths – or rather great heights – to attend classes online, having to climb a birch tree in his remote Siberian village every time he needs an internet connection.

The 21-year-old, a popular blogger and a student at the Omsk Institute of Water Transport, located 2,225 kilometres (1,383 miles) east of Moscow, has got the authorities’ attention by pleading for better internet coverage from the top of a snow-covered birch tree.

In his plea – viewed 1.9 million times on TikTok and more than 56,000 times on Instagram since last week – Dudoladov tells regional governor Alexander Burkov that his home internet is not strong enough to connect to his online classes and that he has been forced to come up with a creative solution.

“I need to go into the forest 300 metres from the village and climb a birch tree that is eight-metres high… and I get on Zoom to speak to professors and prove that I am not skipping class for no reason,” he said.

Authorities in several Russian regions, including Moscow, have moved university students to online classes to counter a surge in coronavirus cases.

Around 80% of Russians regularly use the internet, but coverage is some remote regions can be patchy or non-existent.

The Omsk region’s education ministry told RBC business daily it was preparing an individualised study plan for Dudoladov so he could study in Stankevichi, a village 170 kilometres northwest of the regional capital.

Dudoladov said he wasn’t pleased with the authorities’ reaction and that he had been told by officials to try and catch an internet connection by the highway.

“I was put on an individual study plan, but do they (authorities) not care about other students from other universities,” he wrote in an Instagram post on Monday.

“Why can people from the city use the internet in their apartments while villagers can only do so from highways, rooftops and trees!”