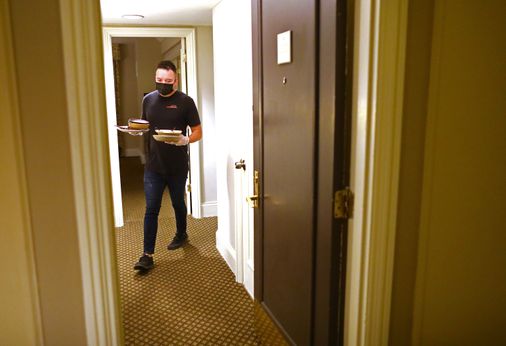 If you’ve ever wanted to tell the couple sitting next to you at a restaurant to get a room, well, now you can — at Uni, anyway. The Asian restaurant inside the Back Bay’s Eliot Hotel has devised an innovative way to help guests socially distance: They’re taking over six of the hotel’s rooms and making them part of their restaurant.

Chef Tony Messina, who won the James Beard Award for Best Chef: Northeast last year, worried about his restaurant’s fortunes heading into the winter. He wanted to avoid going into hibernation, which would force him to furlough staff.

“It’s something that we’re at all costs trying to avoid,” he says. “It really isn’t an option for us. We don’t want to have people out of work. We don’t want to have people having to fight for insurance. If we can keep them alive and keep them gainfully employed and insured, I’m going to do whatever it is in my power to make that happen,” he says.

Guests can book a hotel room — beds are in storage but couches and TVs remain — for a more private, spaced dining experience. Two tables per room are separated by French doors. Uni’s music is piped in to mimic a dining room experience. (Messina favors 90s hip-hop.) Servers run food upstairs while masked, gloved, and goggled. It’s a bit more effort on their part, but Messina says that the hotel rooms are on lower levels, so they’re not climbing too many flights. The menu is the same: ramen, sushi, miso cod.

Of course, the question remains: How safe is it?

“I’m not here to sugarcoat anything. It’s an inherent risk with eating inside no matter what, no matter when,” Messina says. “We sanitize every single surface you can imagine after every single party comes in and out, then deep clean at the end of every night. We do what we can to make it as approachable and as relaxing as possible with the least amount of risk.”

Messina feels lucky to have an affiliation with a hotel that has rooms to spare as tourism lags. Not every restaurant is so lucky.

“We’re going to see great restaurants inevitably shutter, because there’s no help coming in right now from the state and from the federal government. There’s nobody offering us a hand — and I don’t mean ‘us’ as the restaurant community, which is true — but nobody’s offering help to any small, independent business, period,” he says. “I think we’ll see restaurants shutter. I think we will see some darker days, and I think that as a whole the industry will prevail, but it’s not going to be easy. It’s not going to be pretty.”