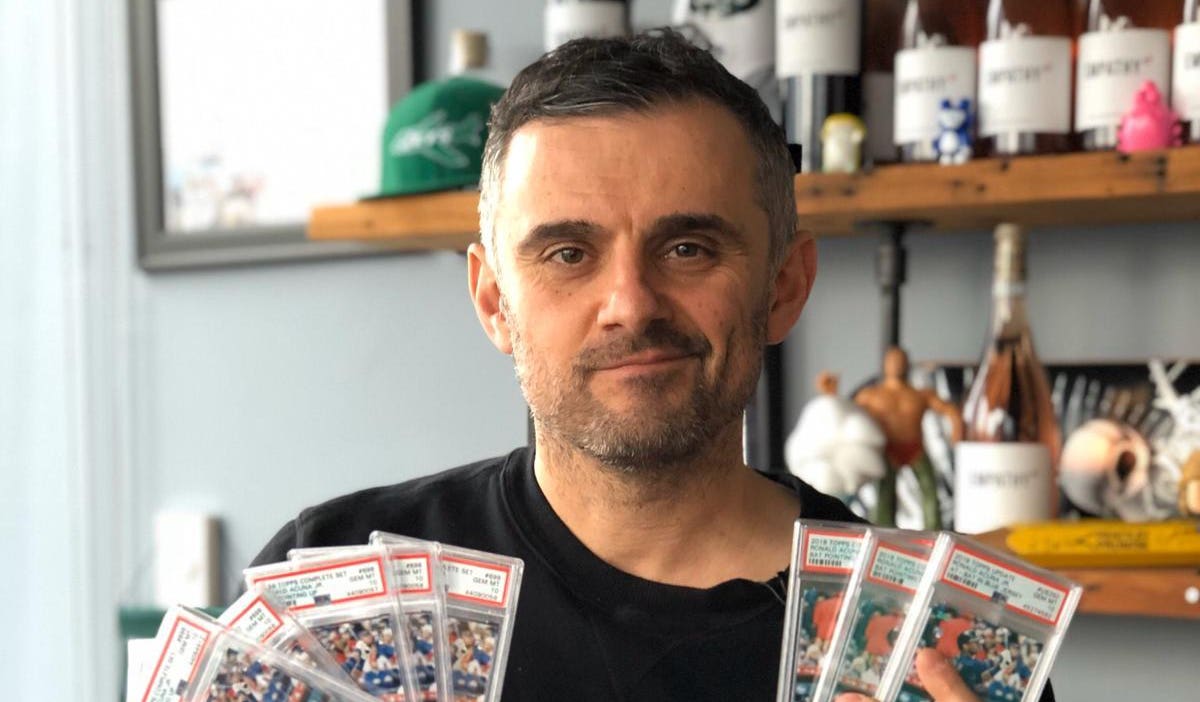 As VaynerMedia CEO Gary Vaynerchuk’s keen ability to execute his vision based on consumer trends and behaviors faster than his competitors led to massive expansion of his entrepreneurial empire, he set his sights on a new frontier: sports cards. His peers countered his exuberance around a youthful pursuit with deeply rooted skepticism.

“When I started talking about it, I got met with 90% laughs and 10% curiosity,” Vaynerchuk said during a recent interview.

Vaynerchuk spent the past few years on social media hyping up the sports card market, encouraging ardent sports fans to purchase professionally graded cards of top legends and emerging prospects. The Covid-19 pandemic amplified his message as families rekindled old collecting hobbies, flippers searched for new product to move, and gamblers looked for a place to make their bets.

With the industry firmly on his radar, he went incognito at the hobby’s main event, the National Sports Card Convention. In 2018, he attended the Cleveland show unannounced and did what he does best—observe.

“I just basically saw what I always knew, which was the older guard,” he said, “but [there was] also just enough 15-, 16-, 17[-year-old] … kids that I would normally see at Complex-Con selling sneakers.”

He added, “I got educated [by] reading, watching eBay, following for months and months on Instagram and Twitter what was going on and basically decided that it was going to happen again, kind of no different than I think about Twitter or DaBaby.”

A Return To His Childhood Roots

As Vaynerchuk spoke up with increasing frequency about buying and selling sports cards, critics called him out for attempting to capitalize on the latest trend. He was quick to remind the loud majority how his involvement started in the late 1980s when kids thought their collections were going to fund their college educations.

“This is pre-internet,” he said, “and literally besides Nintendo, there was nothing else that was universal amongst young men for sure. Every single guy, and I mean all of them—every single guy in my sixth-, seventh- and eighth-grade class collected cards; even the ones that weren’t even into sports had a little bit.”

Vaynerchuk explained how setting up tables at baseball card shows as a teenager in New Jersey laid the groundwork for his future business endeavors.

“I was super into it, not kind of,” he said. “While everybody else was kind of building a binder, I built an actual business and did sports card shows. … I went heavy; it was basically my first real business.”

In 2019, Vaynerchuk signed a deal with Topps that included his own insert set in Topps’ flagship series, as well as a limited-edition standalone set he personally curated. While those honors would send most collectors into a frenzy, Vaynerchuk said the real prize was seeing his own card in the Topps 2019 Allen and Ginter baseball card set.

“Outside of buying the New York Jets, I will never do anything professionally that made me pinch myself more than when I formalized the deal that I’m going to have a card,” he said, adding: “I had an insert in Topps Series 2. Go to the five and dime, go to 7-Eleven, go to a sports card store, open a pack, and there I am. I mean, even right now, I can’t stop smiling. It’s just insane.”

What Gary Vee Would Do If He Were Topps’ CEO

As baseball cards have been closely aligned with the sport’s culture for the past 70 years, Vaynerchuk noted how rising prices have pushed young urban fans away from collecting. If he had control of Topps, he said, his first move would as CEO would be to aim for a younger demographic by creating more low-priced products with rare insert cards.

“First, I would create a new product that was extremely low cost,” he said. “I think it’s very important to have a 99-cent-a-pack product, so we try to get a lot more kids in. I also think that Panini has outnavigated supply and demand to Topps. I think their base products should have more one-of-ones and lottery tickets in them. I think that would help.”

“If I bought the brand tomorrow, I would have a wild strategy session around 8-to-15-year-old Spanish-speaking American boys,” he said. “I would do it through Spanglish content on TikTok. I would do it by doing something with J Balvin and Bad Bunny. I would do it by leaning into those four or five superstar players that we just talked about and tried to do access and exclusive s***.

“I would become very community oriented. I would go in, probably donate money to a bunch of low-income fields around the country to make them Topps fields. I would [also] probably make an exclusive product that only can be bought in the five and dimes, bodegas and stores around local Spanish neighborhoods.”

Is There A Bubble Coming?

As a slew of new collectors with dollar signs in their eyes came to the hobby in 2020, the rush felt eerily like the early to mid-1990s. That was the time when Vaynerchuk sensed the market was getting red hot and exited his position before the 1994 MLB strike collapsed the entire industry. He is concerned many who have jumped in on the hobby hysteria have not done their research and will be left holding the bag.

“I’ve been saying it for quite a while,” he said. “Do I think it’s a great investment? Yes. Do I think that when you buy a bunch of young kids that haven’t done anything, you’re going to get caught? Yeah.”

While Vaynerchuk was upbeat about the long-term appreciation of iconic sports cards, he acknowledged that collectors need to account for the inherent risk of spending thousands on cards.

“That happens when you buy Tesla
stock, like there is no keeping it real,” he said. “This is what you decided, and if you think this is a major bubble, which I think it is for 80% of the product, then don’t buy.

“I can’t help you if Manhattan real estate collapses because of Covid. I can’t; it’s just life. If you loved Power Rangers during the Christmas of Power Rangers, and you paid 90 bucks for those action figures but you can buy them now on eBay for $1, know the moment you’re in; that’s called accountability.”

With millions of followers across various social media platforms, Vaynerchuk realizes the power his keyboard yields. While his message of patience has been consistent, he knows many will make impulsive moves based upon his recommendations without doing the necessary research. It’s a responsibility he accepts, even if they attempt to blame him for their failures.

“I’m not unaware that I’m Gary Vee and people are going to throw shade at me,” he said. “I followed sports in an insane [way], and I’ve been wrong a million times like every other sports fan, but I’m not confused, and I do my homework.

“When people are unhappy, they want to blame someone. If I have to be [the one] because I’m loud, it comes with the territory. I respect that, but I know my intent is pure, and I know if you look at the film and read the transcriptions, I’m not doing anything bad. I also know I don’t pump and dump, so I’m just very comfortable in my actions.”