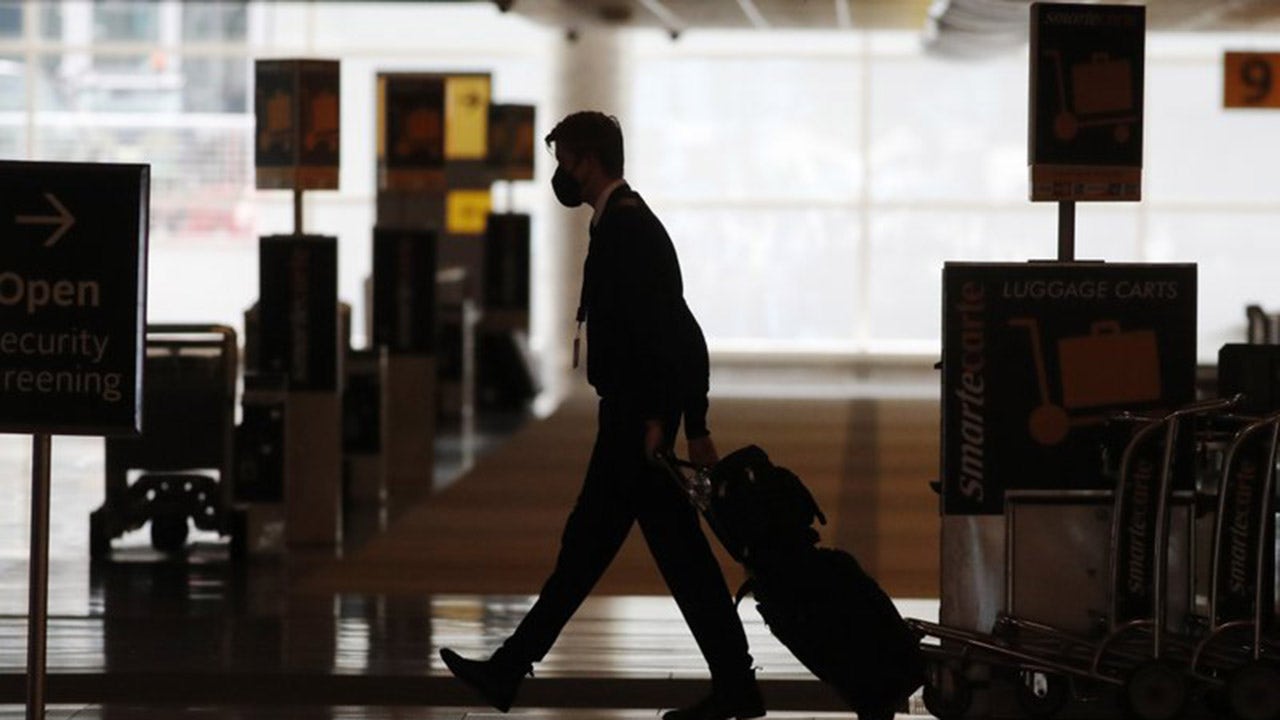 A partner account executive at a U.S. tech firm, Contreras was used to traveling frequently for his company. But nine months into the pandemic, he and thousands of others are working from home and dialing into video conferences instead of boarding planes.

Contreras manages his North American accounts from Sacramento, California and doesn’t expect to travel for work until the middle of next year. Even then, he’s not sure how much he will need to.

“Maybe it’s just the acceptance of the new normal. I have all of the resources necessary to be on the calls, all of the communicative devices to make sure I can do my job,” he said. “There’s an element of of face-to-face that’s necessary, but I would be OK without it.”

That trend could spell big trouble for hotels, airlines, convention centers and other industries that rely so heavily on business travelers like Contreras.

A lone airline crew member pulls his bags behind him as he walks through the baggage-claim area at Denver International Airport in Denver on April 9, 2020. (AP Photo/David Zalubowski, File)

Work travel represented 21% of the $8.9 trillion spent on global travel and tourism in 2019, according to the World Travel and Tourism Council.

Delta Air Lines CEO Ed Bastian recently suggested business travel might settle into a “new normal” that is 10% to 20% lower than it used to be.

“I do think corporate travel is going to come back faster than people suspect. I just don’t know if it will be come back to the full volume,” Bastian told The Associated Press. Right now, Delta’s business travel revenue is down 85%.

Dubai-based MBC Group, which operates 18 television stations, says it’s unlikely employees will travel as often once the pandemic ends because they’ve proven they don’t need to.

Amazon, which told it employees to stop traveling in March, says it has saved nearly $1 billion in travel expenses so far this year. The online shopping giant, with more than 1.1 million employees, is the second-largest employer in the U.S.

INSIDE THE AVIATION INDUSTRIES TOUGHEST BATTLE YET: GETTING BACK IN THE SKIES

At Southwest Airlines, CEO Gary Kelly said while overall passenger revenue is down 70%, business travel — normally more than one-third of Southwest’s traffic — is off 90%.

“I think that’s going to continue for a long time. I’m very confident it will recover and pass 2019 levels, I just don’t know when,” Kelly told the AP.

U.S. hotels relied on business travel for around half their revenue in 2019, or closer to 60% in big cities like Washington, according to Cindy Estis Green, the CEO of hospitality data firm Kalibri Labs.

Peter Belobaba, who teaches airline management at MIT, said business travel is down partly because some people are afraid to fly and partly because companies fear liability if employees contract COVID-19 while traveling for work.

Companies have also reined in travel because times are lean, he said. ExxonMobil cut business travel in February — even before the pandemic’s full impact was felt in the U.S. — because of falling global demand for oil.

Those who want to travel may also be limited by travel restrictions, Belobaba added. Last month, Polestar CEO Thomas Ingenlath observed a mandatory 14-day quarantine in China after flying in from Sweden for the Beijing Auto Show.

The cutback in travel has been a boon for teleconferencing services. Zoom said it had 370,200 customer businesses with at least 10 employees at the end of July, more than triple the number it had at the end of April.

But for some workers, teleconferencing can’t replace being there in person.

Rebecca Lindland, an automotive consultant and founder of Rebecca Drives, used to travel 38 weeks each year for test drives and auto shows. This year, she didn’t fly from March until September. Test drives have been cut back to regional events, so attendees don’t have to travel as far.

Lindland misses the downtime air travel gave her, and she’s confident she can return to the skies safely. She wears a mask, and even before the pandemic she always carried Lysol wipes and hand sanitizer.

Sam Clarke, an assistant professor in the college of business at California State University San Marcos, agrees that some in-person events — like trade shows — will still be important in the future. But he thinks new kinds of business travel could also emerge.

WHY ARE SOME PLANES CROWDED WITH AIR TRAVEL DOWN?

Lockdowns have taught employees how to adapt to different work environments, he says, so hotels, airlines and even cruise ships should beef up their connectivity and cater to business travelers.

Clarke also expects some companies will flip their travel. Instead of letting a few executives travel a lot, he said, companies could let most employees work from home and fly them all back to their headquarters once a year.

Some businesses are already changing the way their work is done. Cynthia Kay and Co., a media production company based in Grand Rapids, Michigan, used to send its seven employees around the country to make videos for clients like Siemens.

When travel came to a halt in March, the company invested in proprietary software and sent iPads and other equipment to clients so it could coach them through their own video shoots, President Cynthia Kay said.

As a result, the company’s sales are down only 15-20% even though its travel spending has plunged 75%.

Still, Kay and her staff were eager to get back on the road once they felt they could do that safely. Kay began traveling again last month.

“For some people, this is the way they will work going forward,” Kay said. “But you can’t account for the spark that happens when you get people in the same room.”