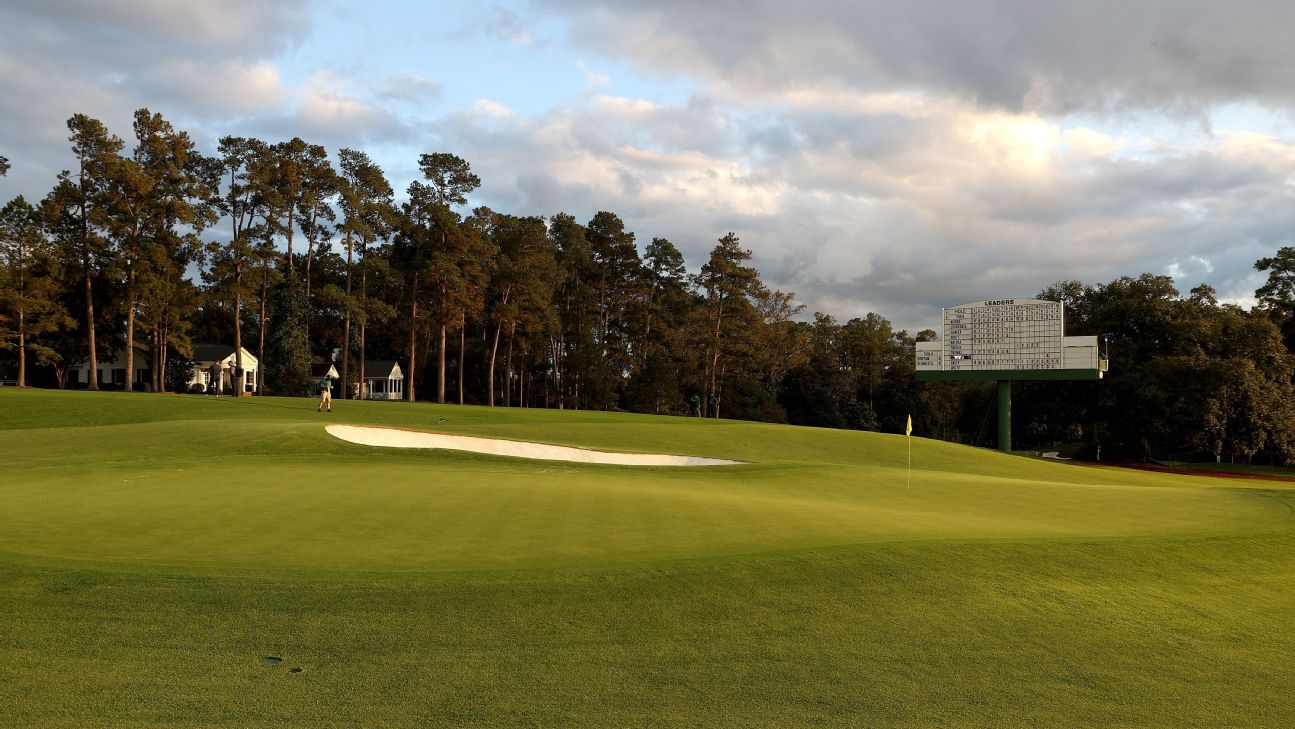 AUGUSTA, Ga. — This Masters was different. It had to be. The tournament was being held in November for the first time. There were no patrons on the grounds.

We share what stood out most to us over seven surreal days at Augusta National:

So much is different in 2020, and a Masters without spectators was still something to behold. It was appreciated and applauded, with the knowledge that nothing this year is easy. Pulling off an event of this magnitude, in this climate, is to be cheered — even if such noise was muted throughout the week.

That doesn’t mean we can’t long for the good old days.

If there is a sporting reason — specifically a golf reason — to get a handle on the coronavirus pandemic, there perhaps is not a better example than a patron-less Masters. It’s not the same, and it would be a shame if we are not at a point five months from now that would allow a decent number of spectators to pass through the gates.

In many ways, Augusta National looked better without so many people blocking the various vistas. It was easier to take in all the beauty and appreciate the pureness of the golf course. There were no grandstands, no ropes, few people. If you were lucky enough to be on the grounds, it was a wonderful experience.

But that is not the Masters. Not even close. Even the practice rounds seemed eerie. On days when upwards of 40,000 people normally fill every available space, creating one of the greatest pre-tournament event spectacles, it was so quiet and almost sad.

When the tournament rolled around, same thing. Typically, the roars that echo through the pines and cascade from Amen Corner all the way up to the clubhouse are something to behold.

“The atmosphere, the crowds, the patrons, the feelings that you normally have here that you didn’t quite have,” he said. “More than any other week of the year, I feel like you’re nervous a little more often, and it didn’t quite have that. Not saying it’s a bad thing. I loved the feeling of being relaxed out there, and it’s something I probably need to try and adopt going into five months’ time.”

There is no doubt that playing in such conditions is easier. The noise adds to the pressure of competing in such an environment. For the first-timers especially, being able to go about the business of golf without fretting over the sound will alleviate stress.

For those experienced in such matters, the quiet takes away from their advantage. McIlroy is used to such surroundings. First-time Masters participants are not.

Perspective is in order, obviously. In this climate, those who run Augusta National did the correct thing. It might be necessary in April, too, if things aren’t better. But once is enough. Let’s hope something changes. — Bob Harig

As Spain’s Jon Rahm walked down the 18th fairway of Augusta National during his final round Sunday, he joked with 2018 champion Patrick Reed about how the course would play less than five months from now, seeing as the 2021 Masters is scheduled for April 8-11.

“You almost have to hit the delete button from what you learned this week because it’s never, ever going to play like this again,” Rahm said.

That’s probably my biggest takeaway from the first Masters played in November: how different and how much easier the course played. Because of the combination of the rain, the rye overseed and the fact that having no patrons probably eased nerves for everyone, the venerable track had never seemed so vulnerable against the world’s top players.

After Thursday’s three-hour rain delay, players were firing at pins with complete disregard for the hazards. A couple of times, I saw approach shots half-buried in pitch marks on the greens, which is something I’ve rarely seen, especially at Augusta. In the past, balls were running off the green into azaleas or spinning back into Rae’s Creek. Not this year.

“You know, I hope they make it as firm as possible,” Rahm said. “The complete opposite of what we saw this week.”

Rahm, who salvaged a tie for seventh at 10-under 278, recalled hitting a 5-iron high on the par-4 fifth and the ball staying on the back edge. “Usually, you’re in the bushes trying to figure out what to do, and many other shots like that usually are just unplayable,” he said.

“All those shots will never, ever play like that again,” he said.

No one knew exactly how Augusta National would play this week, and I’m not sure anyone envisioned it being that friendly. Winner Dustin Johnson broke the scoring record at 20 under. Australia’s Cameron Smith became the first player in Masters history with four rounds in the 60s — and he lost by five shots!

First-timers Sungjae Im and Abraham Ancer started in the final grouping because the course was there to be had. They might be in for a rude awakening in the spring, along with other players such as Collin Morikawa, Matthew Wolff and Cameron Champ, who got their first looks at Augusta National.

“I kind of hope we see the opposite and see a more challenging Masters — or at least be as close as possible,” Rahm said. “I’m looking forward to it.”

The green jackets will have almost five months to stew over it. — Mark Schlabach

If you watch golf — or if you settle in once a year during Masters week — you know what Augusta National looks like, whether you’ve been fortunate enough to step foot on the property or know it only from the screen in your living room. The images are clear in your mind, from Amen Corner to the towering pines to the old-school scoreboards. It’s familiar.

This week, it was, and it wasn’t, and that’s what will stay with me. It was beautiful and sad, alive and undeniably empty.

On Friday morning, after finishing an awful first round and readying to start his second, McIlroy stood next to the 10th tee with his wife, Erica, rubbing her back and having a quiet conversation. It was the first time I realized that, in a normal year — anybody remember normal? — he would never have known that she was there, engulfed by thousands of patrons trying to catch a glimpse of McIlroy and his quest for that missing green jacket.

I stood on the hill beside the 11th fairway, staring at the Hogan Bridge and Rae’s Creek that frame the 12th hole, and heard two volunteers lamenting what not having patrons had done to the city of Augusta — hotel rooms available, restaurants begging for business, traffic moving steadily, rather than at the crawl that normally comes with Masters week.

Early in the final round, Tiger Woods, in his Sunday red, strolled down the first fairway. He was followed by 11 people. Let that set in for a second: Tiger Woods, on Sunday at the Masters, a place so important to the legacy he has built, 19 months removed from making this piece of ground shake, with 11 people watching him.

At Augusta National, you’re always looking around — at the course, at the people. This week, turn your head way one, and there was MLB commissioner Rob Manfred — or at least, I thought it was him behind the required green Masters mask. Over there was Peyton Manning. Wandering over by the Eisenhower Cabin was NFL commissioner Roger Goodell. One member walked by and saw another and said, “It’s like I am invisible without that jacket,” referring to the cherished green ones that mark that you belong.

Early in the morning, I walked the course, spending extra time standing and looking at the peace and calm around Amen Corner. Each day, I stood there, without another person in eyesight. I’ll close my eyes on the way home and think about one of the few calm, memorable moments of this year. I continued my walk, noticing trees along the 13th fairway that I am 100 percent sure were not there last year.

“They like putting trees in,” Bryson DeChambeau said. “It’s fun coming back here because they don’t tell you what they’ve done.”

What they did, too, was eliminate the grandstands. That was the beautiful, jarring, sobering part. Once I got to the top of the hill at the par-5 15th hole, I looked down and realized that it was different. No grandstands to the left. They usually hug the Sarazen Bridge, filled with patrons ready to roar at an eagle and groan when a ball finds the slope and trickles into the water. Behind that, at the 16th hole, where Woods almost made an ace on his way to that memorable 2019 win with Michael Phelps right behind, the grandstands were gone, too. Standing there, to the left of the green and above the pond, gives a seemingly endless view of so much of the property. It’s a view never before seen during Masters week because normally, those grandstands and all those people block it. This year there were clear, unobstructed, silent sight lines.

Every morning, I went for that same walk, from the first tee until I climbed the hill to the 18th green. This past week, I saw the place in the mist and perfect sunshine. I saw it when fog fought the sun. It was serene and breathtaking but also an unavoidable reminder that it’s empty for a reason — because of an ongoing global health crisis. As stunning as it looked, I hope I never see it like this again. — Nick Pietruszkiewicz