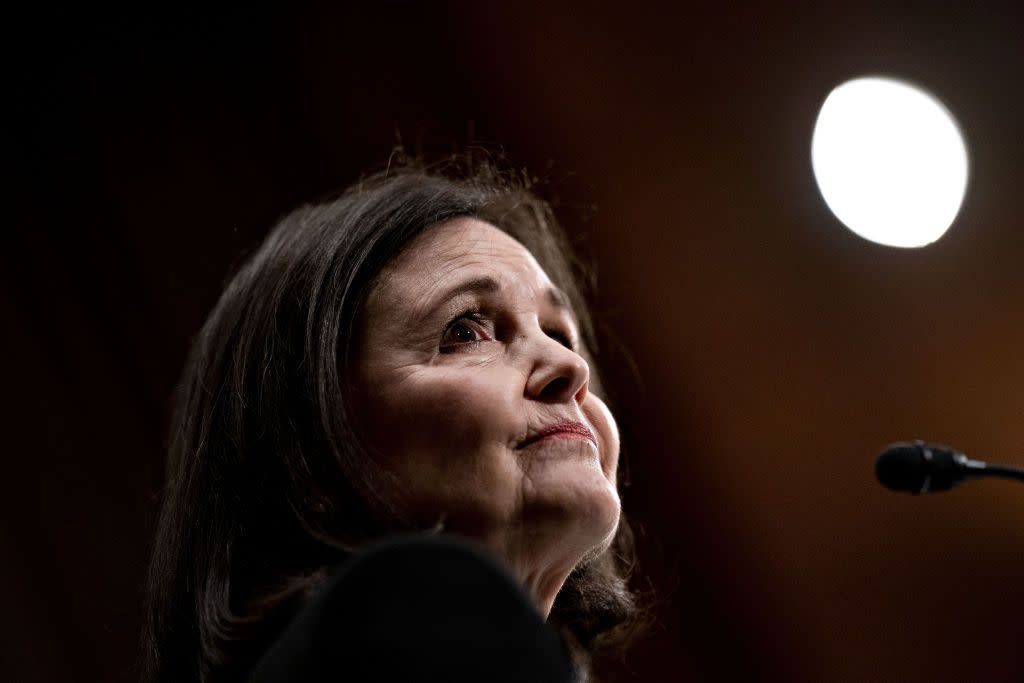 (Bloomberg Opinion) — President Donald Trump nominated Judy Shelton for the Federal Reserve Board of Governors in July 2019, and in the intervening year and a half the full Senate has wisely declined to act on her nomination — until now. Majority Leader Mitch McConnell announced last week that the Senate would take up her nomination as early as this week.

It would be better simply to let her nomination expire. But if Senate Republicans insist on a vote, they should beware: Approving Shelton could set off an arms race of monetary malfeasance.

Republican senators haven’t offered a substantive rationale for their change of heart. Many are undoubtedly looking to prevent President-elect Joe Biden from filling the two remaining seats on the Fed with people who would push the bank to incorporate progressive priorities into its decision making.

It’s not clear that Biden himself has any particular agenda for the Fed. But progressive activists have been pushing the bank to go beyond its traditional role on a variety of fronts. At the most extreme (and, for Republicans, frightening) end of the spectrum is the suggestion that that the Fed could simply print the trillions of dollars needed to pay for the Green New Deal or a similar agenda.

Although the idea has more support than most people realize among progressive intellectuals, there is almost no chance that a nominee who supported it could make it through even a Democratic-controlled Senate. There is a more realistic worry, however: that a Biden nominee would, as former Fed economist Claudia Sahm has recommended, push the Fed to make loans to state and local governments and even private businesses that it knew would not, in all likelihood, be repaid.

Fed Chairman Jerome Powell has been adamant that making loans which are anything less than sound amounts to fiscal policy, not monetary policy. A loan that cannot be repaid is essentially a grant. And Powell has been firm in his conviction that government-sponsored grants are the purview of Congress, not the Fed.

At the same time, the Fed has a strong tradition of operating by consensus, and a consistent voice in opposition to Powell would prevent him from drawing such a clear line in the sand. Moreover, the Fed has greatly expanded the range and scope of its policy actions over the last decade or so, and it is not difficult to imagine that a hazy line will eventually fade into no line at all.

So Republicans are right to be concerned. What they fail to realize is that confirming Shelton will make the potential problem worse, not better.

Shelton has been a consistent advocate for radical departures from traditional monetary policy, including having the Fed establish and then relinquish control to an international commodity standard that would determine monetary policy for all major economies, rather than allowing each nation to set its own policy. By contrast, she has compared the Fed’s current procedures to Soviet-style central planning.

If you fear an activist Fed, Shelton might seem a necessary and valuable counterweight. But in America’s political climate, her confirmation would only encourage Democrats to insist on their own counterweight: someone with views at least as unorthodox as Claudia Sahm’s.

An arms race could then ensue, one that would transform the Fed from a centrist, consensus-based organization into a fiercely divided partisan one. That’s fundamentally dangerous, especially in a crisis such as the one the U.S. is currently going through. Both parties need to trust that the Fed will pursue consensus policies designed to keep the economy afloat.

Powell has done a masterful job at stabilizing financial markets and thus the entire economy, despite a sudden collapse in employment that dwarfs the one the U.S. experienced after the Great Recession. A Fed full of ideological warriors would utterly destroy the credibility Powell has built.

This column does not necessarily reflect the opinion of the editorial board or Bloomberg LP and its owners.

Karl W. Smith is a Bloomberg Opinion columnist. He was formerly vice president for federal policy at the Tax Foundation and assistant professor of economics at the University of North Carolina. He is also co-founder of the economics blog Modeled Behavior.

For more articles like this, please visit us at bloomberg.com/opinion

Subscribe now to stay ahead with the most trusted business news source.